Christian Hostel has Own View of Syria Rebels 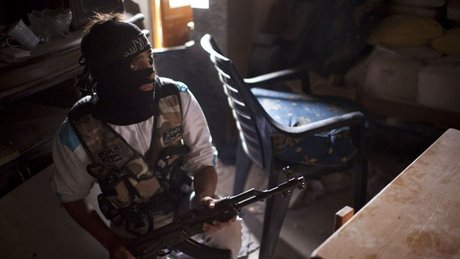 As social media abound with horror stories of jihadists murdering minorities in Syria, a group of elderly Christians in Aleppo and the rebels who care for them portray a different reality.

They object to attempts, including by President Bashar Assad, to portray everyone fighting to overthrow the regime as jihadists seeking to eradicate anyone who is not an ultra-conservative Sunni Muslim.

Once Syria's commercial capital, the northern city of Aleppo is said to have had a Christian community of 20-30 percent, well over double the nationwide figure.

Today, only a small number remains, as people have fled the brutal fighting which has engulfed the city for more than a year.

Six of them live in Mar Elias House, a church hostel for the indigent in the Old City that was founded in 1863, exposed daily to the sounds of fighting only meters away as government forces seek to dislodge rebels who control the area.

Theirs are memories of a time in Syria when Christians and Muslims lived peacefully side by side, and they refuse to believe they are doomed to fall victim to sectarian violence.

The rebels protecting them, devout Muslims to the man, feel the same way.

"A lot of people hear news about how the Islamists are all from al-Qaida and are pursuing Christians or Alawites," an offshoot of Shiite Islam to which Assad belongs, said one hostel resident, Georgette Juri, aged 71.

Not so, she protests.

The hostel is under the protection of the rebel Free Syrian Army (FSA) and a brigade of Islamist fighters, Liwa al-Tawid.

Michael Oberi, another resident, said: "Every morning the men of (Tawid commander) Abu Ammar bring us bags of bread, and every fortnight they bring us flour, salt, rice and pasta.

"Thanks to them, we can move freely around the Old City without fear of radical Islamists, who have a strong presence in this part of Aleppo."

Juri is even more to the point.

"Abu Ammar and his men... watch over us. If they are the ones who kill Christians, why would they protect us?"

A few blocks away from Mar Elias, named after the Hebrew Prophet Elijah who is highly revered in Aleppo, is a Liwa al-Tawid command post.

There, Abu Ammar said: "Christians are not our enemies. The Prophet (Mohammed) respected Christians, and so do we. We did so before the war, and we will afterwards."

"He knew it from before, because he lived in this part of the city, and he wanted us to treat them as if they were our own family."

Seij Abu Mohammed is a Sunni cleric who acts as a sort of a chaplain to the fighters.

He says any fear among the Christians is the fault of the regime, which many blame for exaggerating stories of atrocities against them to undermine support for the uprising.

"We would never do anything to a Christian. We are all brothers," Abu Mohammed said.

While acknowledging that there are jihadist militias who have murdered Christians, he expressed frustration with what he feels are misconceptions in the West.

"They think that just because we have long beards and pray we are all religious fanatics. They should learn that Islam preaches peace and respect."

Looking to the future, the residents of Mar Elias House are steadfast but wary.

"We won't accept Islamists coming from abroad to impose their ideologies and doctrines on us. Before the revolution, all communities lived in peace and harmony, and that should continue after the war."

But if push comes to shove, her husband is adamant.

"I will not leave my home for any reason. If al-Qaida comes to this house and threatens to kill me, they'd better keep their word, because only as a dead man will I go out that door."

new image campaign in AFP, nice, we almost forget about the beheading of priests. not.

says the one who always justify assad's massacres.....

i never did that, but keep doing what you do best, lying.

yes you are mowaten... always commenting the posts to defend bashar s deeds but not when bashar kills or just to say it is not true! ... reading your posts proves who is the liar here! so your opinion is not important....

i challenge you to find a single instance where i justified any massacre.

This is the funniest story I've read in a while LOL. Of course these poor frightened elderly Christians won't speak badly of FSA-Al Qaeda. They have a rifle to their heads! What about the Christian bishops that FSA-Al Qaeda keeps beheading? What about the pillaging and destruction of Maaloula by FSA-Al Qaeda and the killing of its innocent inhabitants.

and you are the BIGGEST LOL! thanks for the laugh you always bring here!

don t take your fantasies for reality... it is not because you are like that in the FPM that everyone looks like you poor idiot...

yes you are... know why? always on the posts to defend the syrian regime but not a word when this regime massacres ... so yes you are the voice of damascus little pup... 3aw 3aw

This is impossible! We all know that only Muslims belonging to either the Baath party or Hizbullah are capable of treating Christians with such humanity!