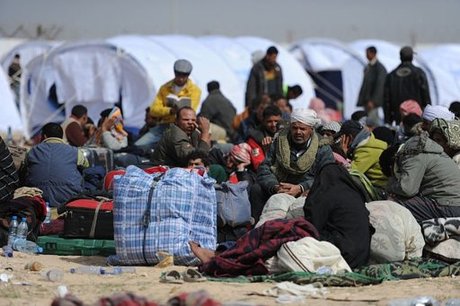 Around 2,000 Chadian migrants trapped in war-torn Libya are being flown back to their homeland, the International Organization for Migration said on Saturday.

The group -- mostly women and children -- have been stuck in the southern desert towns of Sabha and Gatroun while trying to flee across the Sahara to Chad.

"The operation started on Thursday," said the IOM's Jean-Philippe Chauzy. "As of last night, we have transported probably around 500 people."

The migrants had been trying to get to Chad overland, he added, but were stopped by clashes between warring factions.

"They were in a sorry state, living out in the open," said Chauzy.

While many men were able to get on trucks and to fill 4x4s southbound, women, children, the elderly and the sick were less able to make the journey.

According to Chauzy, many of those now being transported had been well established in Libya and may not have been to Chad in years.

An estimated 710,000 people have left Libya since the uprising began in February, the vast majority of them non-Libyans from neighboring countries.

Around 45,800 people are thought to have fled south to Chad.

Their departure has strained services in the desert nation, which has long been highly dependent on foreign labor.

"The majority of foreign workers left due to the conflict, which is impacting on the delivery of many social services," according to a recent United Nations situation report.