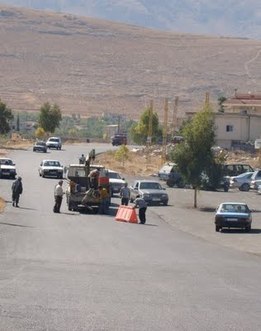 Young men from the Bekaa town of Brital on Sunday kidnapped six Syrians east of the city of Baalbek, in retaliation to the last week abduction of a Brital resident.

“This comes in retaliation to the kidnap of Brital resident Yasser Ismail, who was abducted last week in the town's outskirts,” it added.

Earlier on Sunday, LBCI television said “members of the Sawsaq family abducted six Syrians between Brital and Hawrtaala in retaliation to the kidnap of a man from the Ismail family in Arsal's outskirts two days ago."

Citing reports, LBCI said the abductee was transferred to Syrian territory after his abduction.

Later on Sunday, NNA said Syrian national Mahmoud Ismail and his son were released in the evening, after they were kidnapped by gunmen Saturday near the town of Sirein al-Tahta “in retaliation to the abduction of Lebanese national Yasser Ali Ismail.”

It noted that Yasser was nabbed from the barren mountains of the Eastern Mountain Belt in Brital before being taken to Syria.

Perhaps they thought they were cars?

Sometimes, i feel like lebanon is a joke created by someone who wanted to see the "fun" that would take place if this banana republic was created. Kidnappings between families, really? Abducting turkish pilots in an attempt to release lebanese pilgrims? Supporting gentlemen such as bashar the butcher and sociopath or "king" abdullah the [insert everything bad that exists here] depending on which m-hole you support. This is lebanon today. A JOKE.