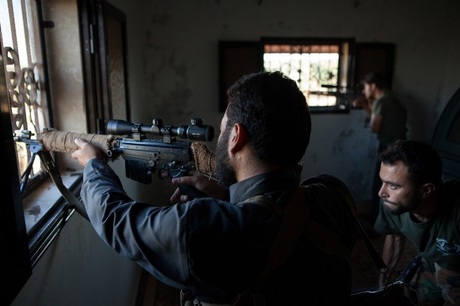 Syrian rebels seized a guard post on the Jordanian border on Wednesday after a month of fierce fighting, the Syrian Observatory for Human Rights said.

"Rebel fighters took control of the Hajanah border battalion post near the city of Daraa after laying siege to it for two months and fierce clashes around it lasting a month," the NGO said.

Some of the border guard battalion had withdrawn, but it was not yet clear how many people had been killed or wounded in its capture.

With its capture, opposition forces now control a ribbon of territory along the border from outside Daraa to the edge of the Israeli-occupied Golan Heights.

Elsewhere, the Observatory reported fierce fighting in Damascus province between rebels and troops backed by pro-regime militias and fighters from Hizbullah.

The clashes were taking place around Husseiniyah and Al-Thiyabiyeh, south of the capital and near the Shiite holy site Sayyida Zeinab, the group said.

Clashes has been reported in the area for months and fighters from Hizbullah, which backs Assad's regime, have been dispatched to protect the site.

The Observatory said the latest round of fighting had left at least six rebels dead as well as 10 members of the regime forces.

State news agency SANA said government forces had "tightened their control over the towns of Husseiniyah and the outskirts of Al-Thiyabiyeh."

In the northern city of Aleppo, the Observatory reported fighting in the Salaheddin neighborhood, where opposition rebels were advancing.

Clashes killed 10 troops, and deaths were reported among the rebels as well, the group said.

In Damascus province, regime warplanes bombed the town of Irbin, northeast of the capital, and the town of Yabrud, north of Damascus, the Observatory said.

And regime aircraft continued air strikes against rebels trying to seize control of two military bases in the northwestern province of Idlib, the Observatory reported.

It also said 15 people, including three women, were killed in a Monday raid on the town of Hamuriyeh, revising upwards an earlier toll of 10.

Flamethrower, some people are willing to die for their freedom and those who defended the tyrant based on sect.