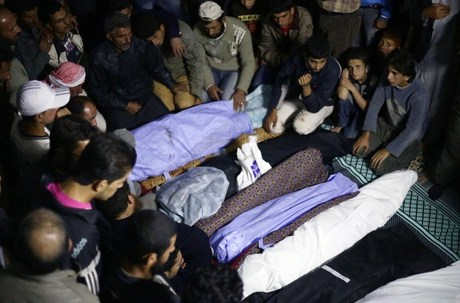 Clashes between jihadists and mainstream rebels in Syria's second city Aleppo have killed nearly 50 people in three days, a watchdog said Saturday, adding that the jihadists made several gains.

A recent surge in fighting among Syria's rebels has cast further doubt on the already slim prospects for a negotiated settlement between the rebels and Syrian President Bashar Assad's regime.

The report of battles between groups that share the aim of ousting Assad came as mortar fire in Damascus claimed the lives of four civilians.

The Syrian Observatory for Human Rights, a Britain-based monitoring group that relies on a network of activists across the war-torn country, said the inter-rebel fighting in Aleppo erupted on Thursday.

It pitted militants of the al-Qaida-linked Islamic State of Iraq and the Levant (ISIL) against a battalion linked to the Arab- and Western-backed Free Syrian Army.

"At least 30 fighters from the (FSA's) Ababil Brigade and 14 from ISIL have been killed in combat, and that toll could rise further," the Observatory's Rami Abdel Rahman told Agence France Presse.

He said the clashes rocked several districts of Syria's former commercial hub, and that ISIL, which expounds an extreme form of Islam, made gains in three sectors.

The ISIL militants have now consolidated their presence in Aleppo, which has been more or less split into a rebel-held east and pro-regime west since July last year.

Although both claim the ouster of Assad as a common aim, jihadists and the mainstream rebels have come to blows many times in recent months.

Across northern and eastern Syria, ISIL has set up checkpoints on roads to border crossings and opened new fronts to try to crush other groups fighting to oust the embattled president.

The Syrian civil war has drawn in fighters from across the Arab world and beyond since it flared in response to a bloody government crackdown on democracy protests in March 2011.

The Observatory estimates that at least 115,000 people have been killed since then, mostly civilians.

The United States and Russia hope to convene a peace conference next month, but their efforts have been complicated by growing rifts within the Syrian opposition.

The intensifying clashes among rebel groups on the ground come after 13 rebel brigades last month rejected the authority of the National Coalition, the opposition's most prominent political institution.

It said at least four civilians including a child were killed on Saturday when mortar rounds slammed into central Damascus and a suburb of the capital.

And an eight-year-old girl was killed and 11 others were wounded in rebel mortar fire on the Abu Rummaneh district, state news agency SANA reported.

The Observatory said the girl was in a car when she was hit.

Rebels have increasingly targeted central districts of Damascus with mortar fire from rear bases on the outskirts of the city.

On Wednesday, two mortar rounds hit the central bank in Sabaa Bahrat Square, and a week earlier a mortar round hit the Iraqi consulate, killing a woman.

The town is largely controlled by jihadists and is near a military site believed to hold some of the regime's arsenal of chemical weapons.

"The regime wants to retake Sfeireh because it wants to take the inspectors to the site," Abdel Rahman told AFP.

"At the moment, they can't, because the road and the area are very dangerous," he said, adding that an exodus of civilians was under way.

Two teams of inspectors are in Damascus verifying and destroying Syria's chemical weapons arsenal under the terms of a U.N. resolution, a dangerous task requiring them to operate in a war zone.

Underlining the dangers also faced by foreign journalists covering the conflict, a Russian photographer has been abducted by rebels who accuse him of being a spy, the Russian foreign ministry said.

Spokesman Alexander Lukashevich said Konstantin Zhuravlev, 32, was seized in Aleppo and was being held by the Islamist Liwa al-Tawhid group.

France this week identified two more journalists abducted in Syria, bringing to at least four the number of its nationals held in what has become the most dangerous place on the planet for media workers.

The jihadists are contracted by Bachar, the same jihadists he use to send to destabilize iraq not too long ago.

The Free World must help the Free Syrians and their legitimate rebellion.

God bless the FSA and their international sponsors.

What did you buy for tomorrow? The gathering is at the french embassy at noon. You know, we're commemorating the 23rd anniversary of cowardness and Treason of Michel Aoun. The day he decided to save his miserable skin instead of honouring and standing by his men. Many died because they believed in his BS. I'm not even going to mention the Lebanese who lost their lives as a result of his bombing of beirut.

I'm thinking of writing to president Suleiman to ask him to decorate him with the order of the cedar.....

I don't think the rest of the world really cares. If they did, they would have intervened two years ago.

do you have any proof that Bashar was sending those Jihadists to Iraq? or you just repeat the fraudulent leaks? Just if you have a little bit of Logic you would know that after the invasion of Iraq, Iraq was witnessing and still witnesses two spheres of Influence who want to take over Iraq by the force of Militias. Iran and the GCC. Iran backing the SADR Militia and affiliates and Saudi Backing those Jihadists. and that is why the Jihadists are in Syria now as an extension of their intentions in Iraq and Hizbullah as an extension of Iran's plan because each side has a Plan which attaches the zones from the Gulf sea to the Mediterranean. walla bess shater te7ki Benzona

You're so sick. Syria's baathist regime dropped Iraq's bath with Assad senior. He betrayed him because Iraq helped aoun against Syria in 89~90 ya zakzak. Bachar sent hundreds If not thousands of kamikaze and jihadists to finish off his revenge. You really aren't that clever after all, unless its purely hypocrisy.

so you think that because of Aoun and our little country Assad backed the fall of Saddam?? hahaha go read Patrick Seale The struggle for the middle east you little boy how old are u 16? Assad has been in conflict with the Iraqi Baath because of the difference in Ideology in what concerns Allies between the two Baath from the war on Iran to the war on the Kurds to the war on Kuwait, and many other reasons which had to do with the personality of Saddam Houssein which conflicts with the Assad personality. Just to give you an example, why didnt Assad become an enemy of Ghaddafi ? did you know that Libya Ghaddafi was also supporting the Lebanese Army while Aoun was General? i suggest you start cultivating your brain little boy.

I thought they were all jihadists? Why are they killing each other?

Long live the Syrian civil war , it may go on for another 20 years . from a lebanese mouth i say what goes around comes around , the more distruction and death in Syria the better