Qabalan Urges the State to Disarm 'All Factions' 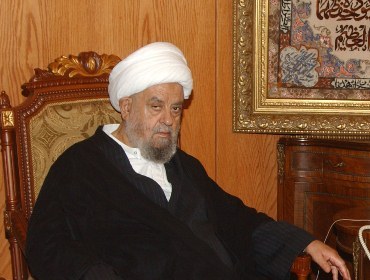 The deputy head of the Higher Shiite Islamic Council, Sheikh Abdul Amir Qabalan, called on Wednesday on the authorities to disarm all factions of the society.

In his Eid al-Adha sermon, Qabalan “urged the state to disarm all factions and stop issuing licenses” to gunmen.

He said that the authorities should take “strong measures” against them.

“The land is protected through good deeds and not arms,” he added.

Qabalan urged all the people to come to their senses, have good deeds, be religious and become honest.

He said the people should recognize the rights of others and be responsible. “God urged us … to have patience.”

Qabalan also asked Bahrain's rulers to “have mercy and steer clear of violence.”

Qabalan wondered why there was injustice and killing in Lebanon, Egypt and Iraq.

Eid al-Adha, which commemorates the willingness of Abraham to sacrifice his son at God's command, is the biggest Muslim holiday of the year.

Wednesday marks the first day of the Eid for Lebanon's Shiites.

if this statement includes hizbushaitan, then I am for it.

"Impossible to live with the shiaa". Go and live elsewhere. We don't want you here you sectarian scumbag.

"Qabalan “urged the state to disarm all factions" This is a nice message indeed. Thanks for the words of wisdom. How about starting with HA? they have more guns than anybody else, don't they?

This man symbolises the true face of our Shiia brethren. Cut your support for HA and listen to this godly man. HA is leading you to your demise, you may feel that their weapons give you strength and ultimately your long overdue rights, but history has taught us that he who takes by the sword will be taken by the sword. Spare your future generations the sword for ultimately it will happen. HA has gone too far and stepped on too many feet. HA has immersed the Shiia into a dilemma that has no exit strategy. The very weight of the weapons they derive their strength from will eventually break their back. The sad part about all this is that there will be nobody to pick up the pieces. Thay have alienated every sect in the country.

God Bless Sheikh Abdul Amir Qabalan for his words of truth and wisdom. Yes... indeed! The state should disarm all factions and stop issuing licenses to gunmen since most of our problems are caused by gunmen with licensed guns and licensed explosives. May 7, Bourj Abi Haider gun battles, Abra clashes, Tariq Jdeedeih and Tripoli clashes are all caused by licensed guns. We, the Lebanese should form an NGO anti-gun lobbyist group to pressure legislatures to ban guns and their use. Heavy artillery, multiple rocket launchers, and drones should be excluded for security reasons. Additionally, Bless Qabalan for condemning the Bahraini rulers and their tyranny against the oppressed Shia Ghandi Style uprising. Another commitment to the dissociation policy.

Does Hezbollah count as a faction?

Shame on you for stooping so low to even think The Islamic Secular Shia Only Resistance aka HA is a faction !!!!!! Hezbullah is a sect and just as much as you claim to be a servant-of-jesus, they are servants of the Al Mighty and the Hussain. They are a noble resistance fighting the Israelis, defending christian aounis, and killing takfiris in Syria. If it were not for this noble faction/sect/party were would you be today huh?

I actually was really asking, and not being rhetorical!
I am not a political science analyst.
I was really just wondering what that statement meant.
That's it.
No mockery, no nothing.
Just a question.

Is hizballah included? I am not clear on this.

lol he is just asking the implementation of UN 1559 that AOUN lobbied for in the US senate....

so tell us who is wrong? aoun for the 1559 or kabalan asking it to be implemented? LOL

if , of course his requests include hezollah.... LOL

another one knowing what God thinks.... LOL

Separation of state and religion NOW....

phoenix : the point is that all these extremists fight "in the name of God".
each side believe the other would be accountable by God. that is the hypocrisy of all those believing they know what God thinks....and that is what led mankind to so many massacres because each extremist thinks God is on his side!

Nassralah is their highest spiritual leader.

What specifically is the similarity?

What God is he talking about. He must have created his own God, one that suits his highness. He said and I quote "“those supporting terrorism through their money and stances” will be held accountable by God" Unquote. But what about the dictator Assad who killed hundreds of thousand, would Qabalan God place him in his heaven? This religious man is misguided and illiterate. Muhamad Mahdi Samsedine was a great person. As for disarming every faction in Lebanon, HA is the only faction in Lebanon that has arms; unless he excludes these peace loving and Godly made creatures who are the favored breed of God.