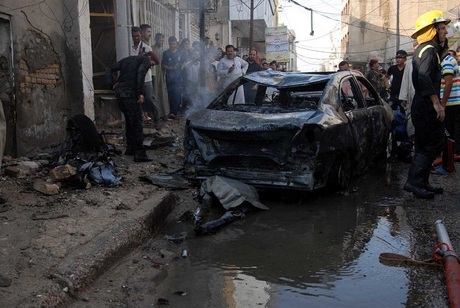 A series of car bombs hit Baghdad province on Thursday, killing at least 44 people, while 22 died in other attacks, including two suicide bombings in northern Iraq, officials said.

The attacks come as Iraq witnesses its worst violence since 2008, when the country was just emerging from a brutal sectarian conflict.

The violence, which has included sectarian attacks, has raised fears of a relapse into the intense bloodshed that peaked in 2006-2007 and killed tens of thousands of people.

Eleven car bombs exploded in eight areas in and around the Iraqi capital on Thursday, killing at least 44 people and wounding more than 120, officials said.

More attacks, including two suicide bombings, were carried out in northern Iraq.

One suicide bomber detonated a vehicle rigged with explosives in a residential area of Al-Muwaffaqiyah, a village east of Mosul that is mainly populated by members of the Shabak minority, killing 15 people and wounding 50.

Another bomber, wearing police uniform, detonated an explosives belt in a cafe in the town of Tuz Khurmatu further south, killing four people and wounding 27.

Another bomb exploded near the house of a Shabak family in Mosul itself, killing a child and wounding three people, while gunmen killed one policeman and wounded a second in an attack in the city and killed another to its south.

The 30,000-strong Shabak community mostly live in a pocket of villages east of Mosul.

They speak a distinct language and traditionally practice a blend of Shiite Islam and local beliefs, which has made them a target for attack by extremists who regard them as heretics.

U.N. envoy Nickolay Mladenov issued a statement condemning the attack in Al-Muwaffaqiyah "in the strongest terms," saying "the United Nations pays particular attention to the protection of minority communities who continue suffering from heinous attacks, economic and social barriers."

He added that "the recent rise in violence in the Nineveh province calls for urgent action and strengthened security cooperation between the Government of Iraq, the Nineveh provincial authorities and the Kurdish Regional Government," which is responsible for the autonomous region bordering Nineveh.

Analysts say the Shiite-led government's failure to address the grievances of Iraq's Sunni Arab minority -- which complains of political exclusion and abuses by security forces -- has driven the surge in unrest this year.

The authorities have made some concessions aimed at placating the protesters and Sunnis in general, such as freeing prisoners and raising the salaries of Sunni anti-al-Qaida fighters, but the underlying issues remain unaddressed.

With the latest violence, more than 380 people have been killed so far this month, and over 5,050 since the beginning of the year, according to Agence France Presse figures based on security and medical sources.

A study released this month by academics based in Canada, Iraq and the United States said nearly half a million people have died from war-related causes in Iraq since the U.S.-led invasion of 2003.

Prime example why the West shouldn't interfere with M.E. unless for a notable noble cause. Lets bring out the new sources of energy off the shelves, mitigate our damages, modify existing infrastructure already built for fossil fuel and stop giving the sorry excuses of human beings our hard earned oil money that empowers greedy royalties, religious and warmongers.