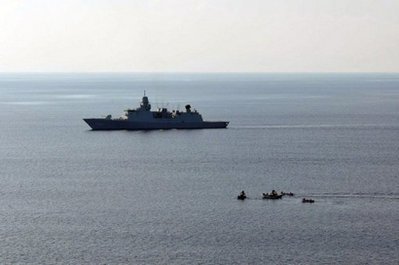 The Combined Maritime Forces -- naval patrols from 29 countries tasked with policing some of the world's most important shipping lanes -- said the pirates were picked up by Australian warship, HMAS Melbourne, some 500 nautical miles from the Somali coast.

After the suspects were arrested, the boarding team destroyed two of their boats and associated equipment.

The anti-piracy force had been searching for the pirates since an attack and gunfire exchange with the supertanker Island Splendor last week. Three days later, the same group of pirates was suspected of attacking a Spanish fishing vessel.

Maritime piracy by Somalians in the Horn of Africa hit its peak in 2011, but has since waned significantly in the face of stepped-up international naval patrols.