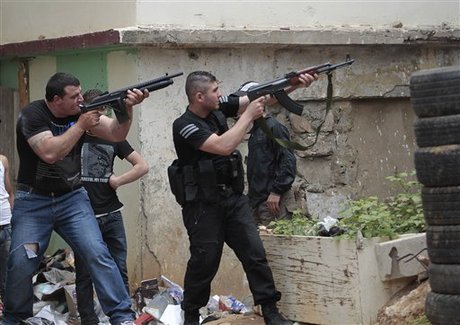 At least two people were wounded Monday evening as clashes renewed between the rival neighborhoods of Jabal Mohsen and Bab al-Tabbaneh in Tripoli.

“Sniper gunfire erupted between the Jabal Mohsen and Bab al-Tabbaneh areas and a hand grenade was hurled on Syria Street,” which separates the two districts, state-run National News Agency reported.

It later said “clashes have intensified and a shell has landed on Syria Street near al-Qaddour cafe.”

“More than five people were wounded in Bab al-Tabbaneh and some families who are trapped in their houses are urging security forces to help them," MTV reported.

Voice of Lebanon radio (93.3) said at least two people were reportedly wounded, identifying one of them as Bilal Hasan Khdeir.

It noted that a fierce exchange of gunfire was taking place on the frontiers of al-Riva, al-Baqqar and al-Omari and that the army was shooting back at the sources of gunfire in a bid to silence them.

Residents were fleeing the al-Baqqar area and Syria Street to safer locations amid the intensification of sniper fire, VDL said.

Voice of Lebanon radio (100.5) said “heavy weapons, machineguns and rocket-propelled grenades (RPGs)” were being used in the clashes.

“A shell landed in al-Omari Street and one person was hit by sniper fire at the Abu Ali roundabout,” al-Jadeed television reported.

Earlier on Monday, NNA said the army reinforced its deployment in the restive areas after an exchange of gunfire broke out on Sunday evening.

"The army has since strengthened its deployment and went on alert in the northern city,” the agency said.

On October 11, an army soldier was wounded as an exchange of gunfire erupted in Bab al-Tabbaneh, Jabal Mohsen and Syria Street following the arrest of a 19-year-old Jabal Mohsen resident by the Internal Security Forces Intelligence Bureau.

Youssef Diab was detained on charges of involvement in the deadly bombings that hit two mosques in the city.

"The unrest erupted after an Intelligence Bureau unit arrested a young man from Jabal Mohsen called Youssef Diab, which prompted residents to protest and fire shots in the air, the thing that provoked Bab al-Tabbaneh's residents and led to clashes," LBCI said at the time.

Now that Tue abductors r free, i guess total impunity is the new reality. This won't end well for Lebanon. Only Israel, Syria, and hizballa will benefit from this... Thanks to a corrupt judge and government.

Indeed Jesus is from Israel/Palestine. How did u guess loser?

These people are not even worried about getting caught.. They are firing as if they were shooting birds... 30 years of war and we learned nothing from it...

king.faisal, I respect king Faisal for what he did... We would have been much better in the Arab world if we had so many people like king Faisal. Unfortunately, what we get is people like Bachar ASSad and his dad who killed so many Arabs, so they can just stay in power. Meanwhile the occupied Goolan Heights area was quiet for over 40 years with Israel... Who is the traitor here...

the answer is easy, they r terrorists. both hired by the giraff 2 stir chaos in lebanon. the thing is the little ones don't know this, only a handful of their leaders.

some1 can make a fortune by organising shooting safaris in Tipoli