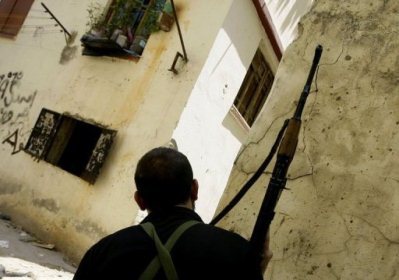 The injury toll from Wednesday's clashes between the rival Tripoli neighborhoods of Bab al-Tabbaneh and Jabal Mohsen rose to eight in the evening, with no sign of the fighting dying down.

“A man called Ahmed al-Basha was wounded in the al-Baqqar as gunfire was heard on the fighting frontiers of Bab al-Tabbaneh, al-Baqqar, al-Rifa and Jabal Mohsen,” state-run National News Agency reported.

It said the army was still shooting back with heavy machineguns at the sources of gunfire.

In the morning, two children were injured when their bus came under fire in al-Rifa area.

Early on Wednesday, "gunmen from the two sides tried storming each other's districts," a security official told Agence France Presse. "The army fought them off, in a battle that raged at around 3:00 am," he said.

All Tripoli's schools stayed closed on Wednesday because of the violence. On Wednesday evening, the two rival districts continued to see sporadic fighting and shooting.

An AFP correspondent in Tripoli saw black smoke rising from a shop in Bab al-Tabbaneh, which had been burned down.

The Lebanese army fortified its presence during the day in Syria Street, which separates the two neighborhoods.

According to the state-run National News Agency, new armored personnel carrier were deployed in the city near Abu Ali roundabout.

President Michel Suleiman held talks with caretaker Youth and Sports Minister Faisal Karami on the situation in the city and the need for the army and security forces to contain the unrest and restore calm.

For his part, Mustaqbal bloc MP Mohammed Kabbara slammed a security plan devised by the security forces to maintain the situation in Tripoli, describing it as a “farce.”

The MP lashed out at politicians during a press conference, considering that they failed in resolving the situation in the northern city.

He noted that the clashes destroy the image of the northern city.

Two people have been killed and 33 wounded in three days of clashes in Tripoli between supporters and opponents of Syrian President Bashar Assad, according to the security official.

"Two people have been killed since Monday night. One of them was a 13-year-old child, the other a 32-year-old man," the official told AFP.

In all, 33 people have been wounded since Monday night, when an interview with Assad was being aired on television.

The 13-year-old victim was from Jabal Mohsen, a majority Alawite neighborhood in the northern port city whose residents support Assad.

The man killed was from Bab al-Tabbaneh, whose Sunni inhabitants support the anti-Assad revolt in neighboring Syria.

The violence has forced families from both districts to flee their homes for other areas of Tripoli.

Violence has frequently broken out in the two impoverished neighborhoods since the March 2011 start of Syria's uprising.

how long are we going to wait before we take out the civilians from there and smash both neighborhoods? enough is enough

While we're in lalaland, why don't we dissolve the army and allocate its budget to the fartsistance?
Since the army is not doing its job of defending the borders and the territories whether from Israeli or assadian incursions...
You'd love to see that happening right?