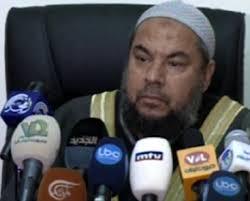 Salafist cleric Sheikh Salem al-Rafehi on Thursday slammed the state for failing to stop the violence in Tripoli, accusing Jabal Mohsen's Arab Democratic Party of starting the new round of fighting in the city.

“Tripoli is being shelled since four days at the hands of a criminal party despite the presence of the security plan,” Rafehi said following a meeting for clerics and leaders of Bab al-Tabbaneh's fighting frontiers.

“Tripoli's residents endured the security forces' restriction of their freedoms at the checkpoints for the sake of their security and stability,” the cleric said.

“The security plan is not defending us and it is preventing us from defending ourselves,” Rafehi lamented, calling on the state to “perform its duties.”

The cleric called on the state to “disband” the Arab Democratic Party, the main political and armed force in Jabal Mohsen, saying its officials must be “put on trial” after “members of it” were accused of deadly bombings that hit two mosques in the city.

“Why didn't security forces arrest those who opened fire in Tripoli? Had another sect been targeted they would have acted differently,” said Rafehi, referring to four days of clashes between the rival neighborhoods of Jabal Mohsen and Bab al-Tabbaneh that have left at least four people dead and 35 others wounded.

Syrian President Bashar “Assad launches threats and the Arab Democratic Party executes them and Assad admitted that this party is loyal to the regime, that's why this party must be disbanded but the state is not doing so. The state is thanking the regime instead of summoning the Syrian ambassador” over the bombings, Rafehi added.

“Bashar Assad must be considered a war criminal, not a head of state, and he must be held accountable for his crimes,” Rafehi said.

“Where is the security plan devised for Tripoli? We want security in in our country and the state is responsible for providing security. It is collecting taxes to do so. Many young men have been killed in Tripoli and more than 50 people have been wounded, where is the state's response?" he asked.

“Why is this only happening in Tripoli? We have neither security nor an economy. Had this happened in Jounieh, Beirut or Dahieh, the state would not have remained silent,” the cleric noted.

The fighting broke out on Monday evening as celebratory gunfire erupted in Jabal Mohsen over Assad’s appearance on al-Mayadeen television for an interview.

State Commissioner to the Military Court Judge Saqr Saqr has charged seven people, three of whom are in custody, in connection with the August bombings that rocked two mosques in Tripoli.

Three of those charged are in detention and the other four are at large. The majority of them are residents of Jabal Mohsen, where the pro-Damascus Arab Democratic Party has a strong influence.

Two Lebanese and two Syrians were already charged on August 30. According to Lebanese media, one of the Syrians, Captain Mohammed Ali, is a security official based in Tartus, a Syrian city on the Mediterranean close to Tripoli.

He is accused of planning attacks in Lebanon along with Syrian security chief General Ali Mamlouk and faces the death penalty if convicted.

Never heard of this Rafehi. Another one of the giraff's contractees 2 make trouble among the other bad people such as the ones he is denouncing.

if u never heard of him, u don't know much about Tripoli...

I may not know him, but he looks evil! Is he the sunni equivalent of nusralla?

he doesnt know much about anything

A shame, its instrumentalized

if the army goes against hezbollah , they know perfectly well it will get divided and split... that is why the army is easy on hezbollah and never tries to go against it...
so those hezbis saying that the army is with hezbollah are just pure hypocrits or just blind people....

PPPPPeace, eres une amigoooooooo, my friend i hope. please dont get upset. the army is instrumentalized by the hizballa faction, if not voluntarily against its will it's a tool of the milicia, perhaps the big fish is more armed than the national army. so, it's a tool, because it's hostage. it does its job by catching the affordable smaller fish. that's why, the general impression is that it's biased. it actually is. ssssssssssso, don't call us hypocrits or blind people. we are seeing the ugly reality, the ugly truth.... we should support it at all cost, but we should also voice oun loud and clear.

forgive my typo erroooors, the Bluetooth keyboard is going rogue.

i am not upset, i am backing your point of view.... the whole army is not all with hezbis because you have different sects and opinions in it, but if the army acts against hezbis those supporting hezbis will split, like it happened to the army in the civil war...

Yes, blackmailing the entire nacion, because they know what happened in the civil war. If only people would also learn not to follow their so called leaders so blindly.
I guet the feeling the civil war never ended but took a break. Probably because the leaders are still around and playing a role.

southern : name us one country that does not have allies? why are you so shocked that some allies with KSA?

you d better be shocked by hezbollah who publicly declared that it OBEYS iran which is far worse than being allied.... you can change your allies (see aoun! LOL) but you are submitted to the country you pledged!

these are facts. if you truly believed in the state of lebanon you d be shocked by this and outraged...

hezbollah PLEDGED allegiance... seems you do not know what that means;;; i repeat it then: it means OBEY ....

deny it if you want but facts are here, like it or not....

if the arab party is banned then so should you... no double standards! LOL

He is ugly. But he is right.

Your comment says all about ignorance and conformism. Btw, why do Christians always represent their God, their Christ and other prophets with beards ? Do they want them to look like terrorists ?
That guy has this face because his Lord created him so and he's following the tradition of ALL prophets not to shave.