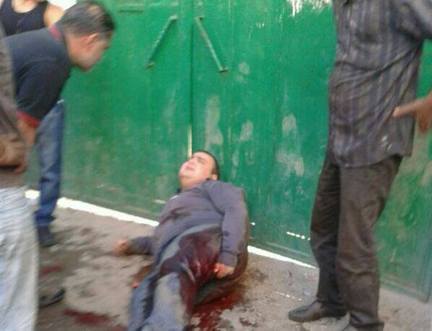 Hizbullah considered on Sunday that the attack on workers who hail from the Tripoli neighborhood of Jabal Mohsen is a “very dangerous message,” urging an end to sectarian incitement.

"We condemn the attack on unarmed citizens, and torturing and shooting them in (the northern city of) Tripoli,” the party said in a released statement.

The statement added: “This crime committed by a vengeful group in the city should be condemned by all factions and is a very dangerous message to all Lebanese.”

“This incident indicates what sectarian incitement can lead to.”

Hizbullah called on judicial and security authorities to adopt the necessary measures and punish the assailants to avoid the repetition of such crimes.

"We also urge the wise men of Lebanon and Tripoli to double their efforts and make sure these crimes do not happen again,” it said.

Why stop there? Why not EVERYONE?

While the attack on the bus is deplorable, and surprisingly reminiscent of the first civil war, the irony and hypocrisy oozing out of this article would be shocking if it wasn't the usual propaganda being spewed from the party on a weekly basis. All one needs to ask is where are these statements after attacks on people of different sects and beliefs? Or even those of a similar sect but with different political beliefs? (i.e. the protester killed in front of the Iranian embassy)

Seems like you pay attention to what you want. They have gave these statements to others. Ex. Tripoli Bombings. But as I recall when the bomb wen't off in Dahieh killing many, tripoli residents celebrated.

Hizbullah condemning the bombings and supporting the ones that sent the bombs is a bit hypocritical, don't you think?

Kind of hypocritical don't you think?

the most sectarian group talking about sectarianism! what a hypocrisy!

This sectarian group you are talking about has supporters from all sects. I have never heard them issue a statement talking only about the shia people and for the support of only the shia people. As i recall Hariri's speeches are always to the sunni people. Thats is pretty sectarian.

Villager, what kind of mental problem do you have?? It is the Army job to protect the country, Hizbullah is an Iranian militia. In all your stupid comments you keep trying to equate the two, if you have such a great need HA go jump down Nasrallah's hole.

Lebanon needs to be saved from the Iranian militia, Assad and the killers/traitors he left in place. Hizbullah is not the Army or its partner, it is an armed militia payed for and under the orders of the Ayatollah.

"Sectarian incitement must stop.”... coming from the biggest sectarians of all. Why doesn't the Glorious terrorist party condemn their partner Assad for the bombings in Tripoli.

Karim, we agree... those Hizbullah terrorists should Zip it, pack up their car bombs and go back to Iran.

In order to live in peace, nasrallah and Bachar must die.

dobbel standard militia. turn in the suspected killers of the slain rafiq hariri before talking.

The irony, Dar Al Salam (house of peace) and all what's happening around it..