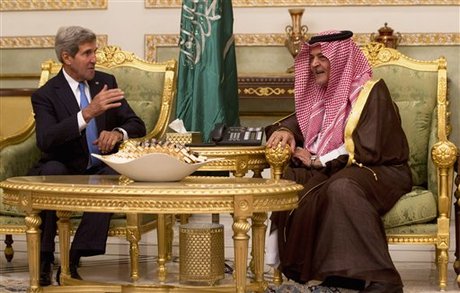 The United States expressed on Monday its rejection of allowing Hizbullah to determine the future of Lebanon.

U.S. Secretary of State John Kerry said at a press conference he held in Riyadh that his talks with Saudi officials discussed the importance of not allowing Hizbullah to dominate Lebanon.

"The party should not be allowed to determine the future of Lebanon,” Kerry said after meeting with his Saudi counterpart Prince Saud al-Faisal.

"The Lebanese determine their future, not foreign powers," he added.

Kerry also stressed at the press conference that Saudi Arabia is a “strategic and enduring ally of the United States.”

“We have strong relations with the Kingdom,” he stated, amid reports of Saudi anger over U.S. policy in the region, specifically regarding the Syrian crisis.

The U.S. top diplomat's visit to Saudi Arabia comes days before President Michel Suleiman is expected to hold talks in the kingdom.

Suleiman's anticipated visit was recently postponed for the second time, after it had been scheduled to take place at the end of September.

The president received a telephone call on Thursday from Saudi Ambassador to Lebanon Ali Awadh Asiri and later FM al-Faisal, who informed him that Suleiman is always welcome in the kingdom and who apologized for the cancellation of the previous trip.

and we urge The us Secretary to help us dismantle and disarm the terrorist organization and to ship the culprits to the Hague.

Let all the world's racists realize that they must hang together or else they will hang separately (to paraphrase Abraham Lincoln). Shias are the majority of Lebanese. If they want Hezbullah, it is the legitimate government of Lebanon.
Consider your remaining allies, racists: Israel, the Gulf monarchies, the military coup in Egypt...anybody else? Oh, how could I forget Jordan? Where did its king come from originally: the English found someone down in Saudi Arabia (as they liked to call it) to install in their colony. They tried this guy's brother or cousin over in Iraq, but that didn't take so well. T.E. Lawrence (Lawrence of Arabia) wrote a letter to the London Times in about 1923 where he said that the three English colonels running Iraq, under the cover of some Hashemite king, were not doing a very good job. What can we say about the colonial agents running Lebanon today?

chris someone's been feeding you the wrong information, in lebanon the Shiites, Sunnis, Christians etc are all the same race, now if we were talking about Armenians or Kurds then it's a different matter. Also Lebanon is not Iraq the Shiites are not the majority. there's almost an even split between the Shiites and Sunnis, mater of fact in the last elections Sunnis outnumbered the Shiites on the voters list.

Shia culture is a culture of racism and hate. It is a culture of treachery and disloyalty. Shia culture vilify Arab and Muslim civilization, denounces our great history, and is full of insults to our greatest men like Omar and Salah Eddin. Omar is the greatest Arab and Muslim leader of all times. At Yarmouk, Alqadissiya and Nahawand he changed the course of history and made the little nation of Arabs to one among the greatest civilizations in history. Shia culture is from the outset a culture of a fifth column trying to undermine Islam as a religion, and to sabotage the interests of the Arab and Muslim nation. Their recent history in Afghanistan, Iraq, Syria and Lebanon is full witness to that. They are the wickedest enemy of their own nation, and the closest allies of Russia, the US, and India, the enemies of Arabs and Muslims.

lol southern! how can the army be strong enough with hezbis more armed than them?? this is just a hypocrit excuse... the army can and will only be strong if hezbis give them their arms and expertise... why does syria only give arms to hezbis when they have a so-called cooperation with lebanon? LOL
the army will never be strong as hezbollah hypocritically wishes it to stay to justify the BS you are talking about! LOL

oh! and it never occured to you that israel always say they are at war with hezbollah but not with lebanon....

as usual you deflect when you cannot answer.... poor southern, your brain is sooo brainwashed...

sure but not a word on how your hezbi friends deliberately keeps the army weak in collaboration with syria to justify their presence! LOL

taht is all you can come up with? really your brain is empty as you cannot justify your arguments! LOL the only answer is that my mind is one of a devil! how childish and weak answer.... poor southern....

Really guys? you have nothing to talk about but Hezbollah? Give me a break. You have the power to change the middle east to a better livable place rather than killing unlivable place. Shame on the Arabs.

see guys, southern can't even reply to your posts as he does not know how his leaders would reply! typical brainwashed and empty brain .... as all the M8ers....

Blackie..... the people commenting on this article are not here to "support US demands", as you erroneously stated.

It just so happens that sometimes the US supports our demands.

anonymetexasusa, Mr.black is another run of the mill Hizbullah proselytizers. As he states there is absolutely no evidence that connects Mr. Nasrallah AKA the Iranian terrorist that hides underground in fear of the Israelis, to any of the assassinations of anti-Assad Lebanese leaders.

Hello -mr.black… I see you have your first Notch, very pretty :-)

If you are so interested in the nation that has the blood of innocent Lebanese civilians on it's hands, just look towards Damascus. BTW why do you not ask Mr. Nasrallah why he sides with the Assad butchers? The Assad's like killing Lebanese so much, they have made it a family tradition.

Really… the Iranian militia has "the support of the majority of the country", how did you come up with that. Was there a vote, did they take a poll at gun point or is this one of Hizbullah's famous unilateral declarations?

The militia is of importance because they are armed and backed by Assad and the Ayatollah and have show a willingness to murder anyone that opposes them. As for Hariri he drifted to the background because it was a better option then being blown up like his father

You don't fully agree with all the things that Mr. Nasrallah does… well isn't that precious.

My question to you was, why is Mr. Nasrallah partners with the the regime that has been bombing, assassinating and oppressing the Lebanese for 30 years.

Mr black. You don't drift away a para military terrorist organization. Hariri doesn't have near the influence of Hezbollah, tens of thousands of armed groups ready to take over every inch of the country, countless rockets and god knows what other weapons. Possible chemical weapons from their Syrian partners.

You might as well hand them the keys to parliament, government, presidency and your house & car.

Hezbollah, as an armed organization must be terminated even if this requires war !

Mr black : it seems you wouldn't be capable of recognizing evidence if it hit you in the face !

Not only is Hezbollah behind hariris assassination, they are responsible for the murder of all the other politicians.

They are partners with Syria, proven to be behind the tripoli bombings and that alone makes the complicit to horrible crimes!

Let the courts decide whether there is evidence or not. If Hezbollah is innocent, they will have no problem showing that in court!