Strict Security Measures in Hermel after Reports of Booby-Trapped Cars 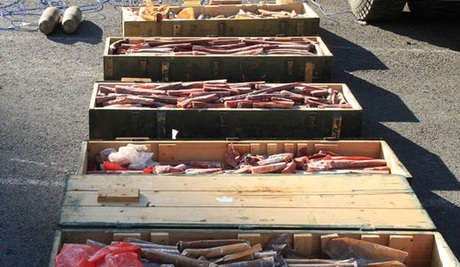 Hizbullah members and army troops on Thursday erected checkpoints in the Bekaa region of Hermel after reports said several booby-trapped cars had entered the area.

“Hizbullah has deployed in Hermel after reports about the presence of explosive-rigged cars in the region and security forces have headed to the area to assess the situation,” MTV reported.

For its part, Voice of Lebanon radio (93.3) said the army has closed roads leading from and to Hermel after reports said three booby-trapped cars were going to be detonated in Hermel.

Separately, MTV said “Hizbullah has retaken the checkpoints it had handed over to security forces in the South over fears of car bomb attacks." The report, however, was swiftly denied by the Internal Security Forces.

On Friday, the army seized a car rigged with 400 kilograms of explosives on a road between the Bekaa towns of Maqne and Younine.

And on November 19 two suicide bombers blew themselves up outside the Iranian embassy in Beirut, killing 25 people and wounding at least 150 others.

Hizbullah said eight of its members, likely affiliated with the embassy guard platoon, were among the dead. The Iranian cultural attache Ibrahim Ansari was also killed in the attack.

Latest news brought to you by the Hizbollah policy, Live just like the Israelis with the fear of Palestinian suicide bombers.
How does Jordan manage to control the Palestinians and make peace with Israel? it is called disassociation policy that Assad first told his Lebanese visitors that he ignores and HA executed his commands.

Hizbullah said eight of its members, likely affiliated with the embassy guard platoon, were among the dead............
ANyone still has doubts about where HA loyalties lie (yes you guessedd it right, welayat elggaqih). Lebanon to HA is an extension to welayat elfaqhih andd its militai are soldiers in welayat elfaqih, and the ayatollah Khamennie is the supreme leader of welayat eelfaqih.

must be so frustrating for you guys, how dare HA protect people from the noble takfiris and their heavenly explosive belts!?

@mowaten : Hezbollah does not protect "people". They protect themselves only. Never has hezbollah stood up for anyone but themselves. Not even in 2006 !

yea sure if you say so. they did tell israel "please bomb christian areas and spare us".
errr no wait, it was the other way around, and coming from one of m14's finest patriots.

@Mowaten : when the entire countries infrastructure is hit. Bridges, electric plants, roads, airport, ... there is no difference between Christian and Muslim areas !

We all suffered from Hezbollah's mistake. Mistake admitted by Hassan himself http://edition.cnn.com/2006/WORLD/meast/08/27/mideast.nasrallah/

So shove your argument where the sun doesn't shine ! You are pathetic !

Why should we pay over $7B for Hezbollah mistakes ?

And you say : "how dare HA protect people from the noble takfiris and their heavenly explosive belts"

You seem to forget that HA weapon of choice was suicide bombers.

you seem a bit confused, HA fought the aggressors who caused the damage you mention, if anything you should be thankful for them taking on that task of defending your country without asking anything from you in return.

what nasrallah said is that he could have never wished for so many innocents to be harmed, but dont fool yourselves, the guilty party is the party who pulled the trigger on those innocents. israel deliberately targeted civilians and civilian infrastructure in a blatantly disproportional reaction. applying collective punishment on innocents instead of facing HA on the battlefield. if you had the slightest dignity you'd take it up against your enemy, not turn against your countrymen.

Hezbollah didn't defend Lebanon. They only defended themselves and all Lebanon has paid the price for their mistake.

Hezbollah chooses when to attack Israel or kidnap soldiers or fight in Syria without consulting the LEBANESE PEOPLE who "LEGITIMIZED" it as a lebanese "resistance".

Therefore, Hezbollah is not a Lebanese resistance. They act on their own. They lose all legitimacy.

So stop struggling to defend them !

whatever, there's no point in arguing with you, you're not being rational.