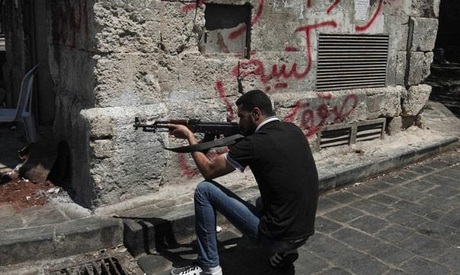 Turkey has shipped 47 tonnes of weapons to Syrian rebels since June despite repeated government denials, a local newspaper reported on Monday.

The government of Prime Minister Recep Tayyip Erdogan, a vociferous opponent of Syrian President Bashar Assad, has openly supported the rebels but has always denied arming them.

"Turkey does not supply arms to any group" in Syria, a Turkish diplomat told Agence France Presse when asked to comment on the report.

He said the U.N. and Turkish records cited by Hurriyet were "guns without military uses".

Hundreds of Turks have crossed the border into Syria to fight with al-Qaida linked jihadists against the Damascus regime, according to an interior ministry report published last month.

Ankara has been accused of turning a blind eye to the fighters crossing its border into Syria.

But a local newspaper earlier this month said that Ankara had deported 1,100 European citizens who had come to Turkey to join al-Qaida groups in Syria.

Syria's moderate opposition appears to be in deep disarray, a concern highlighted after a powerful Islamist faction seized weapons warehouses from the Western-backed Free Syrian Army earlier this month.

The United States and Britain responded by saying they were suspending all non-lethal military aid to the FSA.

Turkey is sheltering about 600,000 Syrian refugees who have fled the civil war at home and also hosts the main Syrian opposition grouping.

This is how i view..Syrians boasted[Sunnis] that they can do anything...no need of outer interference...but nothing seems to be moving for the past 3 yrs...now Assad is gaining more grounds..Hizbullah became a hero..Their independance is lost...now from freedom you will be ruled by Sharia law...