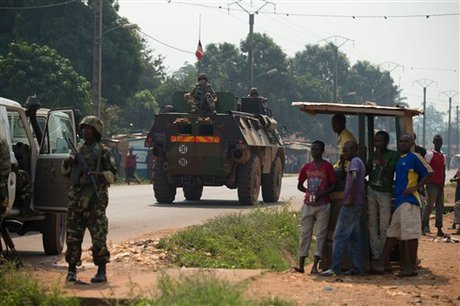 African Union troops early on Monday fired on demonstrators protesting against the president of the strife-torn Central African Republic, killing at least one person, according to Agence France Presse reporters on the scene.

Several hundred Christian demonstrators crowded at the entrance to the airport in Bangui, calling for the departure of President Michel Djotodia, who became the first Muslim leader of the majority Christian nation after a March coup that unleashed waves of violence in the country.

They were also calling for the departure of Chadian troops from the African MISCA force that, alongside French troops, has been struggling to restore order in the country.

When two 4X4 vehicles with AU troops from Chad approached the demonstrators, the latter started throwing rocks in their direction.

The soldiers responded by firing their weapons in the air and toward the crowd, killing at least one person and wounding another, according to AFP reporters.

Many in Bangui accuse Chad, whose President Idriss Deby Itno has been the perennial kingmaker in the Central African Republic, of masterminding the Seleka rebellion that led the March coup.

While Chadian troops are only one component of the 3,700-strong MISCA, African commanders admit that they have been following their own agenda.

Djotodia was the leader of the mostly Muslim Seleka coalition and although he disbanded the group after the coup, some members went rogue.

France has deployed 1,600 soldiers to its former colony alongside the MISCA force.

The French intervention has been largely welcomed by the Christian majority but many Muslims argue operations against the remnants of Seleka have left them exposed to reprisals.

On Sunday several thousand Muslim supporters of Seleka protested in Bangui against French troops, a demonstration that swelled after three ex-Seleka fighters were reported killed in clashes with French soldiers.

Whu do French intervene in Mali, Centrafrique, Libya but not in Syria where 130.000 were killed? because Bachar protects Israel.... that's it.