Chad Troops in C. African Force to be Redeployed from Capital 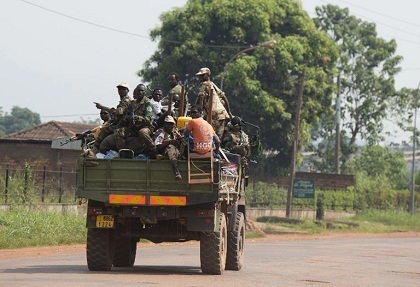 Chadian troops in a Central African Republic peacekeeping force will be redeployed from the capital Bangui, a force spokesman said Wednesday amid charges they were siding with a former rebel group.

The announcement came as exchanges of gunfire erupted Wednesday in several parts of Bangui, including near the airport, residents and witnesses said without giving details about who was involved.

"The whole Chadian contingent will be sent to secure the north in the next few days," a spokesman for the African MISCA force, Lieutenant Colonel Ndong Toutoune, told AFP.

The spokesman gave no other details on how and exactly where the Chadian troops would redeploy in the strife-torn country which has been terrorized by sectarian bloodletting.

The Chadians, mainly because they are Muslim, face accusations by many in Bangui of complicity with the mainly Muslim Seleka rebels who overthrew president Francois Bozize in March in the predominantly Christian country.

The head of the Burundian contingent in the African force MISCA told AFP his men were disarming former rebels on Monday when Chadian troops from MISCA threw a grenade and opened fire on them, prompting some Burundian elements to return fire, wounding three Chadians.

Also on Monday Chadian soldiers opened fire on hundreds of stone-throwing protesters, mostly Christians, killing one man and wounding around 40 others, three seriously.

Traditionally influential in the Central African Republic, neighboring Chad is France's main partner in its efforts to re-establish peace in the country. It contributes 850 troops to the 3,700-strong MISCA force.

But the growing defiance of Central Africans toward the Chadian contingent is complicating the task of the 1,600 French troops deployed to the country since the beginning of December.

The deployment came after interim President Michel Djotodia officially disbanded Seleka, but some of its members went rogue, leading to months of killing, rape and pillaging -- and prompting Christians to form vigilante groups in response.

Amnesty International says some 1,000 people have been killed since December 5, mostly by Muslim ex-rebels but also in Christian reprisal attacks.

Following a night of isolated and sporadic bursts of gunfire, automatic weapons fire and explosions were heard Wednesday in the PK12 neighborhood in northern Bangui, residents said by telephone.

Burundian troops later patrolled the area where Christian militiamen walked the streets with machetes, an AFP journalist said. A body lay on an avenue of the neighborhood.

Sustained gunfire also erupted near the airport, a witness said but it was not clear who was involved.