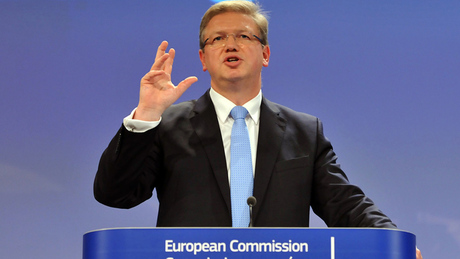 "I urge Turkey, as a candidate country committed to the political criteria of (EU) accession... to take all the necessary measures to ensure that allegations of wrongdoing are addressed without discrimination or preference in a transparent and impartial manner," EU Enlargement Commissioner Stefan Fule said in a statement.

The fast-moving inquiry has struck at the heart of Turkey's ruling elites and thrown up a serious challenge to Prime Minister Recep Tayyip Erdogan's 11 years in power.

The controversial investigation led to a comprehensive cabinet reshuffle after the resignation on Wednesday of three ministers whose sons were implicated in the high-level probe.

Fule said he had followed developments with "growing concern".

Erdogan swiftly responded by sacking dozens of police chiefs and introduced a decree ordering police to inform their superiors before launching investigations issued by public prosecutors -- seen by critics as a bid by the government to contain the probe.

But Turkey's top court on Friday blocked implementation of the government decree which it said would cause "irrevocable damage".

Fule said the government regulation "undermined the independence of the judiciary and its capacity to act" and welcomed the court ruling.