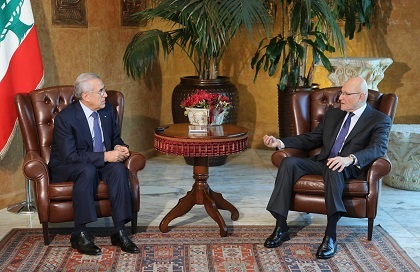 The assassination of former Finance Minister Mohammed Shatah is likely to speed up efforts to form a new government, reported the pan-Arab daily Asharq al-Awsat on Sunday.

The new government will likely focus on tackling security affairs, said the daily.

It is no longer acceptable to keep Lebanon without a government for so long given the deteriorating security situation, remarked Salam's sources.

The lack of cabinet will be exploited by forces seeking to carry out terrorist attacks in Lebanon, they warned.

Efforts to form a new government are nearing their end and all attempts to find common ground between the rival political parties have failed, said the sources without disclosing the details of a possible new cabinet lineup.

It has become pressing to form a government that addresses the people's concerns, they continued.

Suleiman's sources meanwhile told Asharq al-Awsat that it is time to form a new cabinet.

Shatah was killed in a major car bombing in downtown Beirut on Friday morning.

Since his appointment in April, Salam has failed to form a new government due to the conditions and counter-conditions being placed by the rival March 8 and 14 camps.

Suleiman has been pushing the formation of a new cabinet that would be capable of staging the presidential elections.

His term ends in May 2014 amid fears that the disputes between the rival parties will lead to the failure to hold the elections to elect his successor.

The March 14 camp has rejected including Hizbullah in a new government, while the March 8 camp has warned against the establishment of a “de facto” cabinet, instead calling for one that includes all sides.

sometimes I like reading comments of m8 to see how they think.
in their mind:
- an all m8 cabinet is normal.
- an m14 cabinet is: no way.

Pardon me! There was never a M8 government. Mikati, safadi, jumblat and tge president were pro M14 who decided to rebrand themselves as centrist. An M8 gov would have never financed hariri court and would have closed borders with syria to stop the influx of fighters at the start of the revolution, and so on.

I believe the lebanese people are full of crap and are illusional.

you are absolutely right FT!

i don't know how anyone in their right mind would ever call this an M8 government!

ah yes, now i remember: its because about 60% of the seats went to M8 candidates, it's because suleiman and mikati were HA choices enforced violently (too bad non-Shia have a harder time selling their soul to the Hezb) and because not a single M14 candidate was part of the cabinet.

I know, ft, that you must be desperate to worm M8 out of the mess that this cabinet was, but most lebanese see the truth: Aoun got his chance to rule and he did exactly what we said he would do - rob the country blind and surrender our sovereignty to Hezbollah.

As for "documented reality", it shows us that our economy took a nosedive with the entry of the M8 cabinet, with the country in a full blown recession while under the Hariri government we were projected to grow a good 5%.

you're not an economist i assume?

our economy flat-lined because

1. tourism sector went to crap when your friends began kidnapping saudis and qataris like the bajam that they are, causing everyone to warn against travel to lebanon.

2. GCC governments pulling all their investments from the country - after all why would they invest in a country dominated by forces that are openly hostile to them?

3. your incompetent government's inability to pass any laws to help

bas ino 3an jad the victimization syndrome of m8 is hilarious...20 years of continuous growth...sa2abet ino the year that the world wide recession catches up to us happens to be the exact year that M8 takes control of the government...wowowowowwwww

btw flamethrower the majority of nations the size of lebanon with the same culture tend to focus their economy on banking, tourism, etc... because we have large regional nations near by to create produce. no need to create inefficient production sectors when we can just buy from syria for much cheaper.

your ron paul act is cute but lebanon's geographical location and culture dictates that our economy will always be highly liberalized. leave the protectionism for north korea and iran okay habibi?

even those M8'ers who seem to have at least an average intelligence still find the need to generate facts from thin air.

i could bring up the fact that lebanese banks were not tied up in any of the huge international bonds/loans that sunk the US economy, or the fact that even if they were, we would have felt the effect not 5 full years after but probably one or two weeks.

but i understand this would be a pointless endeavor. enjoy your delusions.

FT, lebanon economy is based on investments and spendings from arabs and from lebanese working abroad. It is a country with exceptional geography and weather in the middle east and attract as such the wealth of arabs who love to come and pass their vacation. Furthermore, many international companies had their headquarters in lebanon until 2010 but due to the desperate situation (due to HA of course) most of them left the country to relocate in Dubai. Also, companies are not coming any more to organize seminars for their employees.
The real estate market is down, the hotels have dismal occupancy rates, our youth instead of living and producing wealth in Lebanon are travelling away with their wealth.

It is as simple as that. But you will not admit it in your twisted mind.

you just need to read FT : he is against democracy, and supports the hegemony of HA in Lebanon and the despotic Iranian and Syria regime. He is adamantly against western societies and support living under the darkness of evil regimes.

geha
The constitution and state institutions do not matter for M8. They are on a different path and have a different agenda and they resort to any action including assassination to reach their goals.

It is M14 that boycotts the parliament and refuses compromise on the cabinet yet you say it is M8 that has a different unconstitutional agenda.

mckinl maybe you were still a baby when this was happening but M8 shut down the government for 2 full years for no good reason.

FT revisionism at its finest.

"Berri" did not shut down parliament habboub, Berri, and Aoun, and Hezb all together took part in shutting down the parliament as well as downtown. Yes we remember seeing the aounis on TV sitting with amal and hezb partisans in their little tents.

we also remember your contributions to forming the government in 2008 and 2011.

putting it quite simply we no longer want to be in a government with you, not now and not ever. we already had enough of your backstabbing and your violence and your strong-arming. it's your turn to be strong-armed.

Of course there is no way to compromise with a terrorist party that is not respecting the Baabda declaration and that do not hesitate to kill politicians to enforce its will in the country.

There will be no peace in Lebanon until the KSA and other GCC members call off their Fatwa on the Shia. As far as those in M14 that call the shots Lebanon is headed just where they want it to be ... in chaos ...

hello friend @mckinl.... do the Saudis have Shia in KSA?

Yes the Saudis have Shia in the KSA whom they brutally repress as they have the Shia in Bahrain.

To use Southern english prowess: Does this what so-called Fatwa apply to the Shia in KSA?

ice-man the fatwas work in reverse...they start on the shia in lebanon and syria and move backwards towards their own land. the only other explanation is that mckinl was simply regurgitating propaganda from al manar and i know that isnt true because he seems like a smart person.

Do you think there will be peace while Iran and Syria are heavily involved in LEbanon, arming militias and killing Lebanese leaders who oppose the Syrian-Iranian agenda. Come on mckinl, what about Samaha bombs? This is 100% true proven facts that Syria was planning to create havocs with the help of the traitor Samaha. How can you accept this? how can you be supportive of Syria?

Geha, the constitution states that the only militia in Lebanon is the Lebanese Army!

M8 respecting the constitution? Nope, not in any logic...

The best and most logical comment ever made. Allah Yihmeek Ya Rabb!!!!

What are you doing for New Year's? Dahiyeh or the South?

at least show a bit of decency in front of death!
once more you are accusing the victim of committing a terrorist act on itself!
m8 is just a bunch of terrorist murderers.

they nominate it the way they want, and m8 has no say in this process until it reaches parliament where they can vote on it.
other than that is pure BS and anti constitutional.

btw m8 knows nothing about the constitution: they just know the language of killings and death.

by the way: there is no self imposed exile.
what happened yesterday shows clearly that our leadership should stay out of the country as long as we have terrorist Iranian armed to the teeth occupying our country.
as I said yesterday:

the day will come where the stone you will hide behind will tell about these Iranian murderers.

this is exactly where YOU and m8 are wrong.
simply put you believe your stupid leaders without even checking our constitution.
go and read the constitution and you will discover what the reality is :)
for once in your life go and educate yourself stupid m8 specimen.

what you are talking about was a one time deal arranged in Doha. and that's it.
yeah that same Doha accord that hizbushaitan broke.

go and learn you m8 idiots.

the president and PM can nominate a cabinet made up of the dakenji and his wife from the neighborhood that tammam salam grew up in. it doesnt have to be anyone in particular. then, parliament votes on the lineup. its that simple. read the constitution.

FT, why do you condemn M14 being satellite of saudi and turkish and you do not condemn your aoun puppet and other M8 to be followers of Syria and Iran. You should at least be consistent. But I am afraid this is not possible for you.

It wuold be good that the price of Shatah death be useful to stir this country out of the main mise of Hizabullah, Iran and Syria. It would be good for all the lebanese, and especially for our youth to create stability and prosperity away from the evil despotic regimes that your twisted mind love.