Top Officials Stress 'Same Terrorist' behind All Blasts in Lebanon 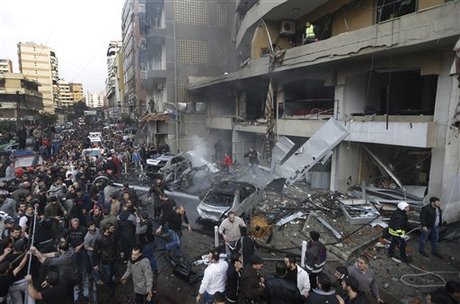 President Michel Suleiman stressed on Thursday that the same terrorists that carried out the blast in the Beirut neighborhood of Haret Hreik earlier in the day, are the ones planting terrorism, killing and destructing all Lebanese regions.

Suleiman's comments came shortly after a deadly explosion hit Beirut's Dahieh neighborhood, killing at least 4 people and wounding over 70 others.

The explosion took place near al-Manar television's old building on al-Arid Street in Haret Hreik, hundreds of meters away from the headquarters of Hizbullah's political bureau.

Suleiman stressed on the importance of solidarity and of being aware of the dangers threatening Lebanon.

"Dialogue is also important between political leaders to protect the country against conspiracies aiming at shaking its stability,” he added.

The president held talks with concerned security officials to receive the latest information on the ongoing probe in the incident, urging them to intensify their investigation and unveil those that planned and executed the bombing and refer them to courts for trial.

Speaker Nabih Berri also considered that those behind Thursday's blast are the same group that executed the assassination of former Finance Minister Mohammed Shatah on Friday, and that planted bombs in the northern city of Tripoli.

As well, caretaker Prime Minister Najib Miqati stressed in a released statement that terrorism "does not differentiate between one Lebanese group and another."

"Terrorists do not want stability in the country, they instead plan and execute a despicable plot that aims at promoting sedition,” Miqati said.

He called on Lebanese factions to “be wise, overcome political considerations and draw an end to approaches of unilateral decision-making and exclusion.”

Miqati warned that tension that is spread in several Lebanese regions indicates that "what's coming is worse."

"We should meet and communicate to find a way out of the current dangerous deadlock to protect Lebanon from evil and from dangers.”

The blast came less than a week after a car bombing targeted Beirut's central district on Friday, killing former Finance Minister Mohammed Shatah and seven others.

In the summer, the southern suburbs suffered two bomb attacks. One, on August 15, killed 27 people. A blast earlier in August had caused no fatalities but wounded some 50 people.

Another proof that someone wants, a new civil war to be set ablaze.

Arab are tools o Iran, West and Israel..problematic ...Even most of Libanon is not Arab . They want tomove Iran. Its obvious. Its only trade. Libanon and Syria paying price of Iranian - Israeli war. You cant fight with smarter people dude

Michel Aoun: The war in Lebanon will never restart if Syria is neutralized. In Syria, then, you see both the origin of this war and its end. Syria is playing the role of a pyromaniac firefighter. December 1995

@sagh son you are obviously not from around here, the guy's name is Michel Aoun. I donno who Michele Aoun is she's probably a very nice lady but that's not important right now, further Aoun never "grew up, learned and found out that he was wrong" he still maintains his stances never changed and he never admitted he was wrong in anything he every did in fact. Ok, you have been schooled and the lesson is over, now run along to you parents basement in Tehran little boy go ogle your avatar and play with yourself but don't let the Pasdaran catch you doing it they will confiscate your picture of the sagh and replace it with a sexy picture of Khamenei for you to look at and continue playing with yourself.

@bacillus1 why do they keep sending you amateurs here with zero knowledge of Lebanon and it's history embarrassing you and themselves in the process. Hafez took the fast train to hell in 2000 and that's when Bashar took over using his father's army to continue occupying Lebanon with the same criminal murderous zeal his father was so proud of until 2005. That's when they were both were unceremoniously escorted and dumped back in Syria. And until 2005 Michel Aoun was still saying the same things about the criminal Syrian regime he said in 1990, 1995, 2000, 2005 his many speeches, interviews and 2003 U.S. congressional subcommittee testimony support that fact. Now bro crawl back inside your mom's arse so she can get her shit str8 and get that belated but urgently needed abortion.

haute, that was spectacular. gave me a pretty good laugh at the expense of this faker (i don't think even the M8 on this site believe he is lebanese)

both of you above are correct.

add to that that the result of the constant aggressions against the sunnis by m8 (whether aoun or hizbushaitan) and 7 ayar, and the constant threats by m8 have fueled this sectarian hatred between sunnis and shias to the point where anything is possible now.

I do not think it is in anyone's interest to have a civil war at this stage, but if it starts, the results will be disastrous.

while hizbushaitan might mistakenly think they can prevail, there are currently over 100 thousand well trained fighters that hate hizbushaitan present in Lebanon (Syrians and palestinains).

If a civil war starts in Lebanon, Hizballah terrorists will make initial gains but then it will turn into a very deadly, very long, and a very destructive stalemate...

Iran hates Arab. Like Turkish. Much more then Israelis. They are using Arab for interest, dealing guns they produce etc....

Dear Geha you are wrong to fight wrong with worse. Dint forget who started the civil war in Lebanon and who has interest to keep lebanon a middle eastern bug. The syrians were watching and the Palestinians were killing and the Israeli forces were happy.

"the same terrorists.....bla,bla,bla......only benefits Israel...bla,bla,bla...." Isnt it time to call a spade a spade? Yes, we have a sectarian war albeit at a low scale so far. It was ignited because of a power struggle, and the first bullet was the murder of Rafik Hariri.

sagheer, learn to speak english properly then come back little farsi boy. in the presence of lebanese you should strive to sound educated since we place a high importance on these things. i'm sure, though, that your english is highly advanced for the average iranian.

West made Iranian revolution.for the trade . Syria and Libanon paying this price. You cant fight Israel, they are too strong, they set up stories for billons, they all using Arab even half of Libanon is not Arab...

"Top Officials Stress 'Same Terrorist' behind all Blasts in Lebanon"

That's what everybody said after both Dahieh and the two Tripoli bombings and we already know, based on Lebanese army intelligence, fer3 al Ma3loumat, Lebanese judicial system's accusation based on evidence and security cameras footage, who was behind the Tripoli mosques bombings. Conclusion, according to documented statements by Berri, Nasrallah, Arslan, Aoun, Suleiman, Miqati etc Assad's filthy blood thirsty moukhabarat aka 'Same Terrorist', one of whom goes by the code name Mystic amongst multiple other code names, are behind all the bombings.

Haram and God bless the soles of the victims and console their loved ones. Otherwise, for the two blundering so called political puppets, I mean parties: "you idiots what did you think was going to happen when you took the government from Christian control and gave it to feuding religious foes with equally deadly regional agendas?" This is all your faults. The country was on the verge of recovery, and I am not so sure now.

HA is a terrorist organization that brought death and destruction upon Lebanon. It is the ONLY enemy of Lebanon.

@Sagh
Your comment is worthless and way out of line.
this is the time to show unity amongst all Lebanese not division and worthless comments

its not the same terrorists as the article says. Its a tit for tat between Syrian goons and salafis. The blame falls on hizballah for going into Syria in the first place. Nasralla wanted to take the fight to them In syria. well, they brought it back to him and alla yerham kill elli twafo....What do these people that died have to do with his decision to enter an open ended war and a quagmire????

eli, thats what mamluk and bashar want u to think...

why do you put it pass the salafis or takfiris to do something like this?
they are fighting each other in Syria why not in Lebanon?

salafis dont do terrorism, maybe takfiris but usually they do videos with cheesy anasheed where they claim rsponsability for the killings, they like publicity...
It looks like Mamluk boys wa Laho a3lam...

lagrimas instead of laughing stupidly could u please give us a definition of salafi and a case of salafis doing terrorism...

Hizballa is behind the m14 bombings, al Qaeda they r fighting (and created) in syria retaliates on hizballa territory. The only victims are m14 and regular people.

Go cry elsewhere. ISIL is created and controlled by the giraff.

thank u primey, people pretend to ignore that those guys where freed from sadnaya by bashar, from abu ghraib by maliki.

@outleb: I totally agree with your accurate analysis of Flamethrower. Thank you!

Agree with the good President.

Could there be a SECRET group causing all these incidents to deliberately create trouble in the Middle East?

Military weapons manufacture is a way to get a desperate world economy moving.

If this is how to repair the world economy, it's a poor economic system and it's time to change it.

People everywhere are tired of it.