France Warns Attacks on Peacekeepers Will ‘Not be Tolerated’ 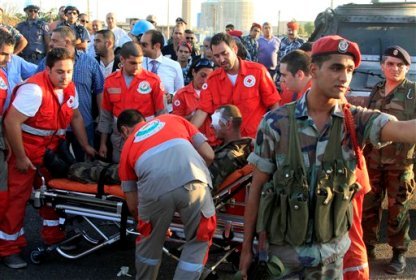 French Foreign Minister Alain Juppe condemned with "greatest firmness" the attack that targeted French U.N. peacekeepers in a roadside bombing in the southern city of Sidon.

Juppe called on the Lebanese authorities on Tuesday to "do everything necessary to bring the perpetrators to justice."

He said France would "not tolerate" attacks on peacekeepers," and that the "security and freedom of movement of UNIFIL soldiers must be guaranteed."

"A five-vehicle convoy was between Beirut and Dar Kifa when one vehicle was hit by an explosion, the reason for which is still undetermined," said a statement from staff headquarters in Paris.

"Three French soldiers were wounded and taken to a civilian hospital in Sidon. Three others with hearing problems caused by the explosion were treated on the spot and did not require hospital treatment," it said.

Follow Jund al Cham. They will lead you to El Sett Bahia, the sister of the filthy low life mafioso, and aunt of Imbecile Saad, the new imbecile Don of the mafia and leader of Al Qaeda - Akkar and Tripoli Brigades, and has now expanded to Al Qaeda - Sidon Brigades. Note that they have the full support OF THE UNITED STATES OF AFFKOLES. PEOPLE!!!!