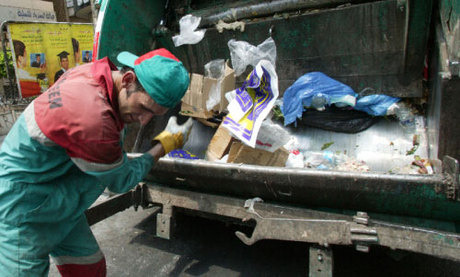 Beirut and Mount Lebanon will become buried in waste after Sukleen announced on Saturday that it will suspend collecting garbage in both governorates.

“People's sit-in near the Nahmeh landfill and blocking the road in front of the company’s trucks for the second day in a row lead to the piling up of garbage that were ready to be plumbed,” a statement released by Sukleen explained.

“Road blocking suspends the collecting of waste and their procession in Beirut and Mount Lebanon,” it added.

The statement noted that the Council for Development and Reconstruction and other concerned authorities are looking into other alternative solutions to the current problem, pointing out that finding a place for plumbing the collected waste is “the Lebanese state's responsibility, not the company's.”

“Sukleen is not concerned with the current sit-in,” the company remarked.

The statement assured, however, that street sweepers will continue cleaning streets and that pesticides will be sprayed to prevent the reproduction of germs.

“We urge people to cooperate with us through making sure waste bags are sealed tightly before placing them in garbage containers, in order to reduce the possible accumulation of trash on the streets,” the statement said.

It added: “We apologize to people for any annoyance this might produce and we hope to resolve this problem as soon as possible to restore the cleanliness of the streets.”

“We hope people understand that these unexpected circumstances are not in our own hands.”

Sukleen is the only company tasked with collecting garbage in the governorates of Beirut and Mount Lebanon.

The problem here is not about money, not directly anyway (read below). The problem is that the landfill that currently collects all this garbage is almost at 3 times the capacity it was designed to hold. Residents in the surrounding areas put up with horrible odours every day, and the rate of cancer in the area has risen dramatically and the underground natural water supplies have been contaminated all because Sukleen does not follow proper international standards of disposing the garbage. This landfill should have been closed years ago but due to the lack of ability of the rules of this country to perform their duties, it has remained open at the expense of the environment and the health of the citizens surrounding the landfill.

DO you have another life, I am serious.

you buffoon, what does this have to do with privatization?

and other than that, would you rather the disorganized disaster that is the lebanese government handle this instead? really? that would be about as efficient as:

Yes, on second thought, privatization would bring us:

it is not the only trash in Beirut and mount Lebanon: what about hizbushaitan?

I have to agree with both samy and greatpiero on their accurate assessment of poster Flamethrower.

one thing m14ers always agree on, is insulting others :)

Now the smell of lebanon will match the mentality of most lebanese, unfortunatly.

It was the communist party members that organized the sit in and blocking trucks,,,, may be they can clean up the streets and find a proper dump for it! If you want to oppose, propose alternative or don't bother

It is the job of sukleen and sukomi, that are companies payed to manag waste in the best possible way, to find solutions. This is not the job of citizens. Citizens' money is spent on paying these companies to do their job right! Plus, if you do your research right, solutions were presented by the sit-in.

Landfills are a problem and I totally understand the concern of Nehmeh residents. But our government is very badly managed and cannot find solutions to real world problems like those.
Ministers should serve the people and not spend their days talking about divisive politics and trying to fill their pockets.
There must be a solution to the landfill problem in Lebanon but we haven't even started to think about it.
Some countries export their garbage, others use them for electricity, etc.
The solution is certainly not bribing a certain politician to get the contract approved but to think about those residents that are truly affected by the landfill and to think about a long term solution to our garbage.

*The solution is certainly not bribing a certain politician to get the contract approved or the sit-in lifted.

It is a sad reality to see here on this forum some people all too ready to jump on others throats with lame accusations, all done mutually and vice versa. The land fill at Al Nehmeh has been blocked by the residents of Al Nehmeh and to the best of my knowledge is not linked to any party. It's just normal people who feel that their rights have been trampled upon, not only by one government, by a succession of government. Now maybe that this has become a national concern would the current administration right a gross wrong. Even though we need to have Sukleen continue garbage collection, but Al Nehmeh residents cannot be expected to take the brunt of dirty politics.

I have to agree with some of you. But i'm sorry to have to say that this is all linked to money. A governor is linked with only 1 garbage company right? we have more than one of those assholes in Lebanon. Each consulted with one company. They pay lots and lots of money to their own companies to clean Lebanon. Lets agree to this so the money ultimately goes back into their own pockets. This is corruptions. The only reason they closed the landfill even though it is full and overflowing is because the owner of that piece of land highered the price to dump trash there. So then The governors did not want to pay this governor. so then There is no other location to dump trash so we are suffering of the garbage on the roads.
Then it will take more than 2 years to make a proper landfill...That is if the government actually decides to do this and actually spend some money.

I want a job