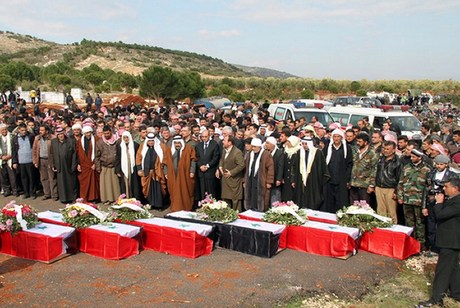 The Britain-based Syrian Observatory for Human Rights has said that at least 25 members of President Bashar Assad's Alawite sect were killed by Islamist fighters in the village of Maan on February 9.

U.N. chief Ban Ki-moon later expressed "great shock" at the killings and demanded that "perpetrators of this massacre" be brought to justice.

SANA, quoting a military source, said "army units have established total control over Maan, after crushing the terrorists who had infiltrated (the village) and committed a massacre against its civilian residents, killing dozens of them, including women."

State television also reported the army's recapture of Maan but gave a higher death toll, saying 42 civilians had been killed by "terrorists," the regime's term for rebels.

The Observatory -- which had reported 14 women among the dead -- said Maan was retaken "after shelling and fighting."

The monitoring group, which relies on a network of activists and medics on the ground, meanwhile reported renewed regime air strikes on the central city of Homs Monday for the second day running.

The United Nations and Syria's Red Crescent evacuated last week some 1,400 who had been trapped inside rebel-held areas besieged by the army for more than 18 months.

The operation was made possible by a deal that included a ceasefire.

But it was suspended after clashes and shelling erupted on Sunday, with the rebels and the regime blaming each other undermining the humanitarian operation.

The Observatory also reported that a jihadist of German origins was killed alongside other fighters in a bomb blast in the rebel-held town of Minjeb in the northern Aleppo province.

Syria's revolt began as a peaceful anti-Assad uprising in March 2011, but morphed into a bloody insurgency after the regime unleashed a brutal crackdown against dissent.

More than 140,000 people have been killed in the conflict and millions have been forced to flee.