Hundreds Protest in Tunisia against 'Terrorism' after 4 Killed 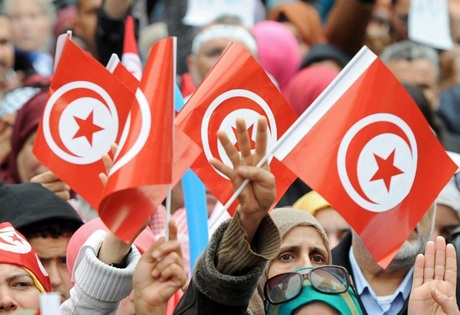 More than a thousand protesters gathered on Monday in the Tunisian town of Jendouba to condemn the weekend killings of four people by suspected Islamist militants.

"Tunisia is free, terrorism out," and "Faithful to our martyrs," were among the slogans chanted by the protesters outside the governor's office in the town in northwestern Tunisia, before marching down the main street, Agence France Presse reported.

Tunisia has been rocked by sporadic attacks blamed on militant jihadists since the 2011 revolution that toppled a decades-old dictatorship and touched off Arab Spring uprisings across the region.

The protesters expressed their support for the security forces, stopping before two police posts, chanting the national anthem and shouting "we are with you."

On Saturday, a group of armed men who had set up a roadblock in the Jendouba area, some 40 kilometers (25 miles) from the Algerian border, shot dead a civilian and a prison warden as their car approached, the interior ministry said.

When a National Guard patrol was sent to investigate, the militants again opened fire, killing two policemen and wounding another two.

The armed group consisted of three Tunisians and two Algerians, according to the police.

Much of the deadly violence witnessed in Tunisia since the January 2011 uprising has been blamed on Ansar al-Sharia, a hardline Salafist movement accused of having links to al-Qaida.

The government has said Ansar al-Sharia was behind the separate assassinations last year of two secular politicians, killings that plunged Tunisia into political turmoil, but the group never claimed responsibility for those or any other attacks.

For more than a year, the security forces have been battling Islamist militants hiding out in the remote border regions of western Tunisia, notably in the Chaambi mountains.

Salaf terrorism? Must be a reaction to hezbollah's actions in Syria
/sarcasm