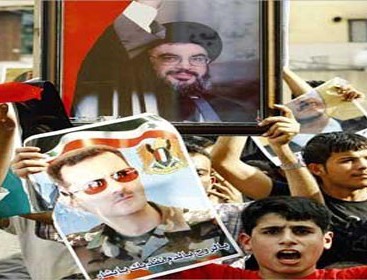 United Nations High Commissioner for Refugees (UNHCR) committee said that Iran and Hizbullah are involved in killing Syrian soldiers who refused to shoot at anti-regime protesters, the French radio station reported on Saturday.

The committee reported that it will publish a detailed report from 20 pages during the upcoming days.

The report will include images and testimonies from refugees and soldiers who defected from the army and are now present in Turkey.

The Syrian government has sought to crush the democracy movement with brutal force, killing more than 1,649 civilians and arresting thousands of dissenters, according to the Syrian Observatory for Human Rights Group.

The committee said that Syrian soldiers who refused to shoot at protesters were killed after they were detained by Hizbullah or Iranian Revolutionary Guards members, “Who are now present in Syria to help the regime repress protesters.”

Western Sources had previously confirmed that Iran and Syria are involved in oppressing the anti-regime protesters, the radio station said.

However, Iran and Hizbullah have continuously refused the accusations.

The latest crackdown has centered on Hama.

The crackdown on Hama has prompted harsh words from Washington and Moscow, with Russia hinting at a possible change of heart after stonewalling firm U.N. action against Syria, its ally since Soviet times.

any one with a brain, should not be Surprised!!!!
scum will always help scum

There you go another proof how those animals behave! Those killed soldiers should be made heroes in Lebanon and their names added in martyrs square to that of lebanese fallen in their fight for dignity and liberty. The UN report prooes if need be that hizbolah once more has turned into a terrorist organisation with global reach, in Egypt, Argentina, Bahrein, etc... They have to justify being on the payroll of their Farsi paymasters..
It' s about time whole contingents of the Syrian army splits and fight with the freedom fighters.As to the Hizb thugs, they will pay for their actions some time in the not too distant future I hope..

confirming what we already knew

How many really believe this lame joke by a body as useless as the UN? Perhaps these soldiers ask the opinion of Iran and Hizbullah before deciding not to shoot, then they are given yellow t-shirts to wear and then they are shot because now they have become identifiable!!! Who knows!

Jesus Christ! Anyway... I think the best thing 2 be done is to wait for those 20 pages before someone can comment about anything!

Finally, some evidence!!!!!! These thugs so called resistance are driven by sectarian hatred and nothing else. They support the shiite uprising in Bahrain but not the Sunni uprising in Syria.... The Bahraini Shiites have nothing to complain about. They have one of the highest per capita incomes in the world and an open society. They just want to change the regime aided by Hizb of Iran and Iran and get a foothold in the Gulf. The Syrian people on the other hand are starving, mainly uneducated, and are ruled by a ruthless dictator who inherited power from his killer father. I am not against the uprising in Bahrain provided it is based on fundamentals such as lack of freedom, low income, no future, etc.

Hizb of Iran end is being written as we speak.......
Assad will fall sooner than later.....
History is being written .....
A new dawn is just around the corner.....
Syria and Lebanon will be free and will coexist as true neighbors should be based on mutual respect.

This is an accurate assessment, In Lebanon for 30 yrs the Syrian army was unable to enter any city before destroying it to the ground, in essence street fights were carried out by Lebanese or Palestinian militias.
Hang Bashar Now for the mass killings of the normal citizens.

We all know this to be true, but soon the Iranian propagandists will be here to post comments denying these reports (mowaten, phenicien, ado and others).

Just go to youtube, or go to the syrian revolution facebook page to find more information, or google it for research on black shirt snipers.

Iran and Hezbollah need the Baathists in power to continue their evil plans of terror in Lebanon and elsewhere.

The ayatollah who ordered the murder of Hariri, Gemayel, Turni, Kassir, Eid,, Eido, Ghanem, and others is the same ayatollah who is now ordering the murders of Syrian soldiers who refuse to kill innocent peaceful protesters. It all makes perfect sense.

This is bad publicity for Iran and Hezbollah. The STL will soon implicate Iranian Quds force members in the murders of Lebanese martyrs. Hezbollah is no longer considered a "resistance" but a division of the Iranian Quds force. The shine on their reputation has now become a stench.

Hezbollah and Iran know that without Syria they are doomed. A terrorist without a gun cannot terrorize as simple as that. So they will go to any extent to lengthen their survival. Hezbollah as a group is not a natural phenomenon. Sooner or later it will die of its own death.

Couldn' t agree more people-power. How can you get 100 Million US dollars a month (give or take some change!) and not be a subsidiary of the pasdaran. They' re alos structured the same way, with a two layers structure, civilian, and religious (who is really in charge). Same corporate resolutions, same corporate culture, that of dominance through murder, and stalinist ideology. Direct reporting lines to the CEO, Khamenei, plus a few other Chief operating officers. One can only assume that this well concealed organic link, which only perspires when there are occasional media covered events etc.. is in fact a daily coordination, with clear reporting lines, etc...One can only imagine what that means in the Hariri file and others.. Hamas is probably another partly owned subsidiary of the theocrats in Teheran....A few months ago a canadian news agency reported that according to their journalistic sources, Khamenei ordered directly the execution of Hariri. One cannot imagine for a second

Well said "people-power"..... I am hoping justice will soon prevail and these wicked evil thugs in Lebanon and Syria will be behind bars. When this evil regime will fall so will their surrogates here. People will rejoice all over the world when this modern day Hitler will finally be thrown into the abyss of history along with his surrogates here in Lebanon.

That Badreddine, Aneissi and the lot acted alone, and mustered millions in cash and explosives needed for the operation on their own...And that their hierarchy didn' t order, instruct plan everything. SO this talk that the STL is not indicting Parties , but individuals is only a semantics game, the reality is ...what will soon be very clear when the STL report is made public!

This is the best one we've seen so far! LOL

Absolutely despicable.And predictable. They will shoot more Lebanese in the back if they don't get their way as well.

Is this news to anybody? At least now the un knows the truth about these pigs

I'll have to grudgingly agree with Bigdig. These accusations, if true, are so severe and so devastating for Hezbollah that we need reliable, established sources before we pass judgment. If the UN is making the accusations, then it must present the proof behind it.

Hezbollah's continued support of Assad at this juncture is bad enough; These accusations take things to a whole different level.

here is the link bigdig click on it:
http://www.elnashra.com/news/show/373245/%D8%A7%D9%84%D8%A3%D9%85%D9%85
and its from Elnashra so I doubt its not a credible article and the UN will present a strong accusation case againt Hizballa and Iran because its seriousness will take things to other levels like u said Jabal10452

BigDig states facts and presents evidence. Yet, there are so far 5 who gave him thumbs down! For what? Isn't this proof enough that these thumb downers are pure idiots? I guess my comment about these idiots will also get me an abundance of thumbs down! The more idiots, the merrier. You want to know why? Because idiots are losers by definition.

Bigdig, you can claim that you come here for your own "amusement", but that's not a believable explanation. A more reasonable explanation is that you are a paid propagandist.

It is your job to try to post comments to defend Hezbollah, Iran and Syria. Why else would you spend so much time here if you feel Naharnet is such a terrible news organization?

Why do you feel the need to try to discredit everything that goes against Hezbollah? Normally a person who disagrees with a certain news organization, they will just choose to avoid reading reports from that organization. But you are here all the time, posting many comments (also your coworkers phenicien and mowaten). It makes no sense.

I think yo' re right people-rght about bigdig Le Prhemicien etc...! In particular Le Phenicien' s arguments (doesn' thave any in fact!) remind me of those 8 year kids who can only prevail in the playgrounds, by cheating, cursing , and making very primary personal comments, artificially charged emotionnaly, directed at their comrades , appearence, clothes, name or whatever. Very silly inded, especially if you' re clearly a foul player!

Big Dig, Kitty, "Silent Reader", thank you for proving my point. Do you get paid in pistachios?

Bigdig, where did I list any definitions in my comments? Where did I say I read only Naharnet and avoid other news sources? Simply answer the question..... why does a pro-Hezbollah person such as you spend so much time on Naharnet posting comments if you disagree so much with Naharnet?

Kitty, you can tell bigdig is smarter than everyone by reading his intelligent comments on here? Wow, you are really full of yourself. Or is it because you graduated with him from Tehran University of propagandists?

Silent Reader, we liked you better when you were silent, be true to your name.

But thanks for admitting you are a propagandist. You said it yourself, that you are spreading (posting) your information hoping to help others form an opinion. Go look up propagandist, and you will see your resemblance.

Good luck to you. I don't intend to engage any further in a conversation with you.

“The UNHCR has categorically denied the information published on the website of Al-Arabiya news channel on Aug. 5 quoting French sources and attributing inaccurate statements to UNHCR. The same statement draws reference to a report which the High Commissioner for Refugees has no connection to, and which has also recently been carried in newspapers in Lebanon,” the UNHCR statement said.