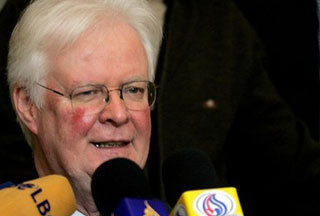 United Nations Special Coordinator for Lebanon Michael Williams stressed on Monday the importance of parliament’s adoption of the law on maritime issues.

He said after holding talks with Speaker Nabih Berri: “I thanked the speaker for his support and strong condemnation of the attack on the French contingent in the United Nations Interim Force in Lebanon on July 26.”

“We also touched upon the issue of Syria and I briefed the Speaker about the telephone call that Secretary General Ban Ki-moon had with President Bashar Assad on Saturday,” he stated.

Earlier on Monday, he held talks with Phalange Party leader Amin Gemayel on various local and regional issues, including the Special Tribunal for Lebanon.

He said after the meeting that he had no idea how the Lebanese authorities will respond to the indictment in the STL.

The tribunal has set August 11 as a deadline for the Lebanese authorities to hand over four suspects in the assassination of ex-Premier Rafik Hariri.

Williams urged the Lebanese authorities to respect the date set by the STL.

He also thanked Gemayel for his support for UNIFIL, condemning the July 26 attack.

The conferees also discussed the situation in Lebanon and Syria.

Williams said he contacted U.N. chief Ban Ki-moon, urging him to halt the regime’s crackdown on protesters and to respect human rights.

For his part, Gemayel’s press office announced that the two officials discussed the obstacles preventing President Michel Suleiman from renewing the national dialogue.

The statement remarked that the STL is determined to continue its investigations, especially after revealing new elements.

They also stressed the need for Lebanon to respect U.N. Security Council resolution 1701.