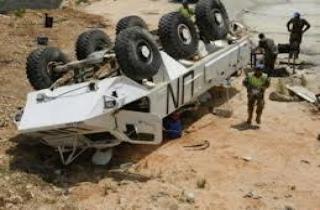 Three soldiers from the United Nations Interim Force in Lebanon were injured on Saturday after their military vehicle overturned in the southern Tyre District, the state-run National News Agency reported.

According to NNA, the three peacekeepers are from the Malaysian contingent and were injured in the town of Maarakeh.

They were transferred to the Malaysian contingent's field hospital in the area.

Bet the troop carrier is made in Spain, they all roll over.

i hope u're right and it's a bmr600.
Coz it looks like a VAB, and we'll probably get some from France...