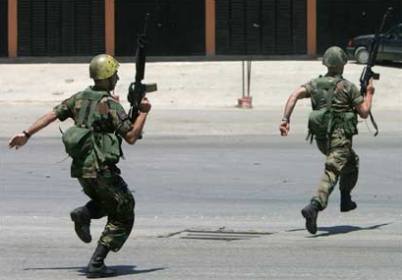 An armed dispute in a Palestinian refugee camp in the southern city of Tyre renewed on Monday, forcing the army to deploy on its outskirts to contain the incident, the state-run National News Agency reported.

NNA said the sons of Jaafar Hajou – a man injured during a fight in al-Bass camp on Sunday - opened fire near the house of Youssef Draz, who fired back in the air.

No one was injured in the incident, the agency said.

But the army deployed near the camp and blocked the road leading to it to prevent any deterioration in the security situation.

The gunfight between the members of the two families erupted on Sunday after three brothers Youssef, Hussein and Salim Draz stabbed Hajou, who is their uncle, over financial disputes and old problems.

Disarm them, disarm all militias and thugs. We need peace and prosperity!

yes, say that while the people you support keep inviting al qaeda in Lebanon, and keep wanting to disarm HA so israel can come in easily.
you dont sound hypocritical at all.

Oh FFS do u always have to start playing the blame game...far out.. Old broken record

Why can't u just agree that we need to disarm palestinians

Maybe we can send HA in to disarm them? Any thoughts?

lol who is that "we" who thinks he can "send" HA anywhere?

mowaten
I have been advocating for a while that HA disarm the Palestinian camps.
These camps are infested with jihadists and are the source of all bomb laden SUV's.
HA is the only credible force that is capable of cleansing these camps and impose Lebanese sovereignty over these camps. After all this is Lebanese territory and it is insulting that Lebanese authority is not allowed inside these camps