2 Rockets Fired at Israel in New Attack from Southern Lebanon 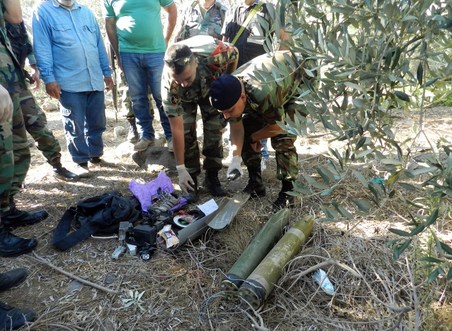 “At 12:25 am, unknown individuals fired two rockets from al-Qlayleh plain (near the southern city of Tyre) towards the occupied territories (Israel),” Lebanon’s National News Agency reported.

LBCI television said Israel responded by firing several shells at the outskirts of al-Hinniyeh and al-Ezriyeh in Tyre district, amid overflights in the area by its military aircraft.

Israeli forces also violently bombarded the peripheries of al-Mansouri and Majdel Zoun in Tyre district, according to NNA.

The Jib al-Sweid area in the outskirts of the town of Zibqin was also targeted by Israel, the agency added.

Earlier on Sunday, the Lebanese Army found a launchpad from which three rockets were fired overnight Saturday from the Tyre region towards northern Israel, NNA reported.

The launchpad was discovered in the Ras al-Ain plain, south of the al-Rashidiyeh Palestinian refugee camp, and an “unexploded bomb” was also found in the location, the agency said.

The explosive device was removed from the site after it was examined by a military expert.

On Saturday night, unidentified men launched three rockets towards Israel from al-Qlayleh plain to the south of Tyre in southern Lebanon, NNA had reported.

"Two rockets fired from Lebanon hit uninhabited areas in the Nahariya region," a coastal town around 12 kilometers from the border with Lebanon, an Israeli army spokeswoman told Agence France Presse.

A Lebanese security source told AFP at least one rocket was fired at around 10:20 pm (1920 GMT) from an area south of the port of Tyre, about a dozen kilometers from the border.

Saturday's attack followed the launch of a Katyusha rocket from southern Lebanon into Israel early Friday, also without causing casualties or damage.

In Lebanon, security forces managed to arrest at a western Bekaa hospital one of the militants behind Friday's attack, after he was seriously injured while firing the rockets.

The kingdom of terrorism likely supplied them.

Southern: the war caller from his cosy flat.

If Egypt and Jordan can have peace with Israel, why can't Lebanon?
By sitting down together, those three countries solved all their bilaterial problems. Why can't Lebanon do the same?

You are right. Why can't we? Let all the Arab leave the Palestinian to hang and then Israel can impose any type of solution it wants. I suspect phillipo that very many Lebanese refuse to be cold blooded as you are and since we live in a quasi democratic country, the people have some say. In Egypt and Jordan, they are dictatorships which tolerate no dissent. And phillipo, I am all for a peace treaty with Israel and even normalization. Let them accept back the hundreds of thousands of Palestinian refugees that are in Lebanon that they ethnically cleansed and that they refuse to allow back in contravention to international law.

Because Lebanon is not a sovereign State and can't act for it's own interest. It has to be the battleground for Syria and Iran interests.

Because were not your little bitches like they are Philippo. Capiche? Yalla try to invade again so you can be hung by your balls.

Hang the next terrorist who tries to drag Lebanon into war.

Rafehh: In 1947 UN voted for participation of Palestine. guess who refused and attacked Jews with 7 Arabian armies?
You guessed right it was the Arab Palestinian, 6,000 Jews were killed and murdered, part of them were the last remaining of families perished by the Nazis allies of the Mufti El Husseini who declared Jihad on Jews decorated as SS army officer. refugees who run away from Palestine from the feared being slaughtered by Jews (same if the Jews lost).
Same year 1.2 million Jews were expelled from all the Arabian states as punishment for the independence declaration of the state of Israel. Jews been expelled only with their cloth on. While Jews been rehabilitated by Israel, The Palestinians were kept by their brothers 65 years in camps with no human rights. Israel will accept the Palestinian back the day Jews will be allowed to return to their homelands receive the stolen property.

bigjohn: If Israel is Apartheid state how come Arabs been elected to the Knesset. Arabian Judge is in Israel's high court, Arabian doctors are in Israeli hospitals and been elected as consuls and ambassadors.
How many Palestinian in Lebanon can be members of your parliament ? how may can work freely and own property? and how many Jews can live in Arabian countries with full human rights? So before lecturing about apartheid make your homework and look at your country.
Over 65 years Palestinian in camps in Lebanon and you did nothing to assist them.

Palestinians groups/ salafists or whatever other terrorist losers, go to Palestine and fight, not from Lebanon u peace of sh-t..

They are ready to sacrifice till the last drop of Lebanese blood, as long they and their families are safe

but nasrallah always maintained he wants to liberate palestine from Lebanon...?

I truly think peace with Israel is long over due.