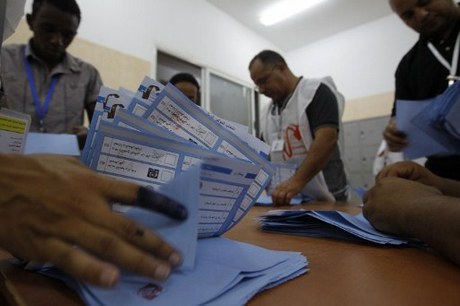 Liberal factions appear to be the big winners in Libya's new parliament after the announcement of election results on Monday, analysts said.

The electoral commission finally announced the results of the winners of individual seats in the June 25 poll a day late and at a time when rival factions are involved in clashes for control of Tripoli airport.

But the future make-up of the 200-seat parliament will only be known after the formation of political blocs, since the vote was open only to "individual candidates" and lists were barred.

Commentators say liberals will fill most seats in the new parliament, unlike the former assembly which was dominated by Islamists.

"According to my estimates, the Islamists have not won more than 30 seats," a Benghazi deputy, Younes Fannouch, told Agence France Presse.

He added that he believed the liberal National Allied Forces party had won more than 50 seats.

In the east of the country, he added, supporters of the federal system, and hostile to the Islamists, had probably won between 25 and 28 seats.

Fannouch said the remainder of the seats will have gone to "independents" like himself who are "opposed to Islamic politics."

Another deputy, Ali Tekbali, affirmed: "The majority of those elected have no ideological allegiance."

No date has yet been set for the new parliament to sit.

Twelve of the 200 seats have not been attributed as the vote in certain polling stations was annulled due to suspected electoral fraud.

The election was marred by a poor turnout, violence and the murder of a leading women's rights activist.

Authorities had hoped the poll would ease the political turmoil and rising lawlessness gripping Libya since its 2011 revolution which ousted longtime strongman Moammar Gadhafi.

But only 42 percent of 1.5 million registered voters turned out, according to the commission, with several MPs elected with less than 1,000 votes.

The outgoing General National Congress, elected in July 2012 polls, had been mired in controversy and accused of monopolizing power.

The crisis came to a head when members of the GNC in February, when its term was due to expire, decided to extend their mandate until December.

That sparked street protests and forced lawmakers to announce the June election.