Erdogan: 'I No Longer Talk to Obama' 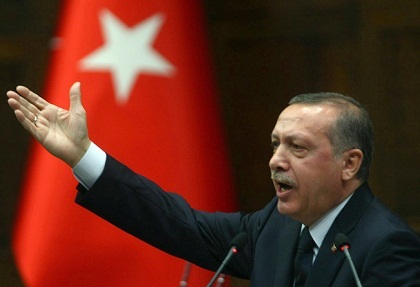 Turkish Prime Minister Recep Tayyip Erdogan said he has stopped talking to U.S. President Barack Obama on the phone, amid growing strains between Ankara and Washington over Syria and the Gaza conflict.

Turkey, a fierce opponent of Syrian President Bashar Assad and an open supporter of armed rebel fighters, felt betrayed when the United States backed away from military action against Damascus in September.

"In the past, I was calling him (Obama) directly. Because I can't get the expected results on Syria, our foreign ministers are now talking to each other," Erdogan said in a live interview on pro-government ATV channel late Monday.

"And I have talked to (U.S. Vice President Joe) Biden. He calls me and I call him.

"I expect justice in this process. I couldn't imagine something like this from those who are championing justice," Erdogan added without elaborating, in an apparent jibe at Washington.

The last phone conversation between the two leaders took place on February 20 after which the White House released a statement accusing Erdogan of misrepresenting the content of the conversation.

A staunch advocate of the Palestinian cause, Erdogan has recently been at loggerheads with Washington over Israel's offensive in the besieged Gaza Strip that has killed more than 580 Palestinians in two weeks.

Erdogan accused the Jewish state of carrying out "state terrorism" and a "genocide" of Palestinians and criticized the United States for defending Israel's "disproportionate" tactics.

The U.S. State Department branded his comments on Israel "offensive and wrong" but the prime minister hit back by saying the United States needed to engage in "self-criticism".

Erdogan is standing in August 10 presidential elections that he is expected to win, with analysts awaiting a more assertive foreign policy from Ankara if he becomes head of state.

lol obama is on the right track then if scumbags like erdogan and the saudi slime don't want to deal with him.

Erdogan has diplomatic relations with Israel and he never claimed he wants to wipe off Israel, unlike your hero Nasrallah. Zip it