Jumblat: Only Palestine Can Bestow Legitimacy on Arab Rulers 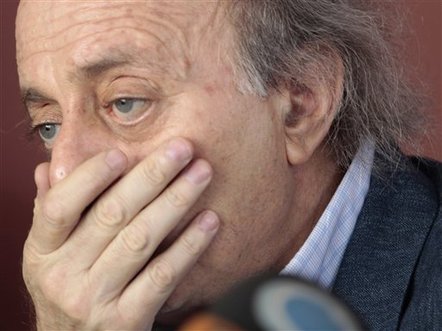 Progressive Socialist Party leader MP Walid Jumblat on Wednesday lashed out at the rulers of Arab countries and their stance on the relentless Israeli assault against the Gaza Strip, noting that “the human remains of martyrs will fire back at them all.”

“As the daily holocaust continues in the Gaza Strip, one fails to find words in any dictionary to express indignation and anger over what is going on there, amid a state of complete ethical downfall of all the components of the so-called international community and Arab society,” Jumblat said in a released statement.

At least 660 Gazans have been killed in 16 days of fierce Israeli bombardment, which did not spare children, women or even hospitals.

“The West is still a captive of the Nazi Holocaust and it is hiding behind it to treat the victim and the executioner equally, turning a blind eye to the central and main crime behind all the events of the past and present, which is the Israeli occupation of Palestine,” Jumblat added.

“Where is the stance of the French Socialist Party, which is disregarding the new holocaust against the Palestinians, leaving behind its heritage that had several historic landmarks, topped by the solidarity posture of the Socialist International (SI) during the 1982 (Israeli) siege of Beirut,” Jumblat wondered.

Turning to Germany, the PSP leader called on Berlin to “overcome that historic psychological complex created by the Nazi Holocaust against Jews, which is totally condemned,” voicing regret that “the German stance is, unfortunately, descending towards further subjugation, cowardliness and regression.”

“The ultimate and blind U.S. support for Israel reflects the absence of a value system among Americans, which has been lacking since the American state was established on the land of others,” Jumblat added.

Slamming Russia, the PSP leader said it seems Russian President Vladimir Putin “has decided to erase all the history and heritage of his predecessors and the heritage of the Soviet Union in supporting the Palestinian cause, focusing all his attention on winning a lost cause in Ukraine or regaining the glories of flimsy empires.”

Jumblat also hit out at Tehran, saying “the calculations of the nuclear haggling have suddenly overshadowed the cause which it had always voiced support for – the Palestinian cause – as it continued to ignore the continuous genocide in the Gaza Strip.”

Criticizing Arabs, Jumblat said “it's about time Arab rulers -- whether they belonged to the old or new generation -- realized that only Palestine can bestow legitimacy on them, and not vice versa.”

“The human remains of martyrs will fire back at them all and will turn the entire Arab world into chopped up remains. At that moment, the developments will be open to all possibilities and will grow out of any control,” the PSP leader warned.

The master of useless speeches

easy way to recognize israeli hasbara agents: they get mad when anyone speaks in favor of palestine.

joumblatt is definitely not a role model, to say the least, but no arab can disagree with what he said here

Who is this guy to compare this to the Holocaust, where millions of Jews were killed in concentration camps? 700 does not equal 6 million Walid Bek.

The Arab world you reference fought many wars for the "Palestinian" cause. How many times did they attack Israel? How many died before they realized that wasn't the way? Heroes in the Arab world are Anwar Sedat and King Hussein. They were the wise ones. They figured out earlier than you that Israel is a permanent fixture, and the only answer is peace.

Gaza should look like Israel. It was handed to them with industries and homes. What has happened since? They turned it into a military enclave....all the international money given to them went to building missiles and tunnels. What if they dedicated themselves to this thing called coexistence? Can you imagine how prosperous and beautiful it would be?

Your advice is meaningless drivel. Why would anyone listen to you? What are your achievements? The happiest Druze in the world live in Israel. They are left alone to prosper. You offer nothing other than misery.

"ready to destroy the Zionist enemy if asked to do so."
With what exactly?