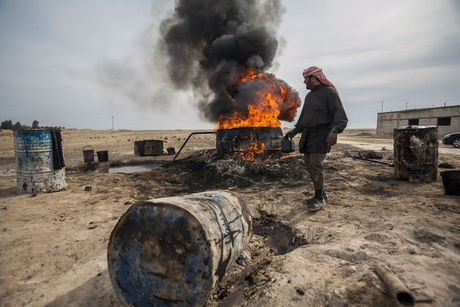 Syrian government troops Saturday recaptured the Shaar gas field in Homs province from the Islamic State, a week after the jihadists seized it, the Syrian Observatory for Human Rights said.

"Since this morning, there has been fighting around the Al-Shaar field between regime forces and the IS. The army has succeeded in ejecting the jihadists, and it now controls the site and surrounding hills," Observatory chief Rami Abdel Rahman told Agence France Presse.

The powerful jihadist group, which operates in Syria and Iraq, killed around 300 members of the Syrian security forces in the battle for the key facility. Some of them were executed after being captured.

Congratulations to President Assad and his professional SYrian Arab Army, defender of all faith and all minorities.

sry to the 300 syrian arab soldiers who died fighting these disgusting animals. im not an assadist, but i hope they kill each and every last one of these barbaric apes.

ISIS and Assad port each other. Its all for show. Only one source claimed that the gas field was taken and only SOHR claims it was retaken. last I heard the gas field is stiull in ISIS posession. But so what ISIS sells oil to assad and will sell gas as well. assad never bombed ISIS headquarters. assad supports, ask him why.