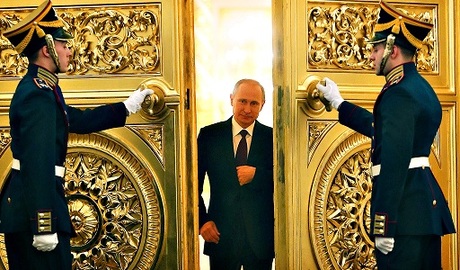 Russian President Vladimir Putin began talks on Saturday with the leaders of arch-foes Armenia and Azerbaijan after recent clashes that have left 22 soldiers dead and fueled fears that one of the bloodiest post-Soviet wars is restarting.

Putin held separate talks at his residence in Russia's southern Black Sea resort town of Sochi with Azerbaijan's President Ilham Aliyev and Serzh Sarkisian of Armenia. A trilateral meeting was due to be held on Sunday.

"We will no doubt talk about the most painful and chronic problem of resolving the Karabakh," Putin was quoted as saying by Interfax news agency at the start of his meeting with Aliyev.

The conflict has been festering ever since, with international mediators unable to find a political solution and both countries remaining on a war footing.

The brittle status quo along the so-called line of contact between the two sides has been shattered in recent weeks. At least 22 soldiers have been killed in the fiercest clashes since a ceasefire was agreed in 1994.

Putin's spokesman Dmitry Peskov said both the Armenian and Azerbaijani leaders "expressed concern about a rise in tension connected with the incidents of recent days that have claimed lives..."

The tensions between energy-rich Azerbaijan and Moscow-allied Armenia have escalated as ex-Soviet republics are uneasily watching the Kremlin's historic confrontation with the West over Ukraine, where government forces are battling Russian-backed separatists.

Each side has blamed the other for the latest surge in violence and there has been plenty of saber-rattling.

Sarkisian told Putin at the start of his meeting with the Russian leader that he would inform him "about the situation in our region and the reasons for the deliberate escalation of the situation by Azerbaijan" on their joint border.

Aliyev was more diplomatic, saying that the conflict "has dragged on for too long and most be resolved."

But earlier in the week Aliyev vowed he would boost the strength of Azerbaijan's army.

"We will restore our territorial integrity either by peaceful or military means. We are ready for both options."

France and the United States, which together with Russia have tried to mediate a resolution to the Karabakh crisis, have welcomed the Sochi talks and urged an end to the clashes.

Russia's top diplomat recently admitted that finding a breakthrough after two decades of mediation would not be easy.

"A multitude of attempts have been made and every time it seemed that some important milestone for reaching agreement was in sight but something stood in the way," said Russian Foreign Minister Sergei Lavrov.

Officials have sought to lower expectations about the meetings.

"Expectations that after the meeting there will be complete peace or a return to a full ceasefire are misplaced," Armenian Defense Minister Seyran Ohanyan said on Wednesday.

"Such meetings provide opportunities to start, to continue a dialogue," he said.

"We all know well that dialogue is the only way to resolve questions peacefully."

After a failed attempt earlier this year by French President Francois Hollande to bring together the Armenian and Azeri leaders, Russian analysts see the Sochi talks as reaffirmation of Russia's predominance in the region.