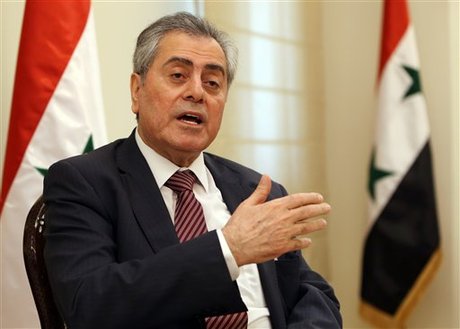 Syria's ambassador to Lebanon Ali Abdul Karim Ali announced on Saturday that the situation of Syrian refugees returning home has been solved after hundreds of them have been stranded in border areas in the past days following the clashes between army troops and jihadist militants in the northeastern border town of Arsal.

On Friday, media reports said Syrian authorities prevented a convoy of refugees from returning to their homes on claims that they are the relatives of fighters battling the regime.

And on Thursday, many others were prevented from entering the neighboring country because they had arrived illegally in Lebanon, and therefore, do not possess legal documents that allow them to cross the border.

"We have solved the issue of returning Syrian refugees stuck in al-Masnaa (border crossing) area in Lebanon, and we found ways to allow them to enter Syrian territories,” Ali said in a released statement.

"And we thank Lebanese authorities' cooperation in this respect,” he added.

Several hundred Syrian refugees who had been sheltering in Arsal tried to cross back into Syria on Friday. A first group of 350 of some 1,700 refugees passed through the Masnaa border crossing back into the neighboring country.

But the departure of may was not possible because they had either entered Lebanon illegally, or because Syrian authorities prevented them from returning home on claims that they are the relatives of fighters battling the regime, as media reports said.

At least 47,000 Syrian refugees have taken shelter in Arsal, a town where many residents sympathize with the Syrian uprising against President Bashar Assad.

But their presence and reports that some of the militants fighting the army since August 2 emerged from Syrian refugee camps in Arsal, have raised tensions, including in the neighboring town of al-Labweh.

More than a million Syrian refugees have flooded into Lebanon since the conflict began in March 2011.

And this week's departure appeared to be the first time a group of refugees has left Lebanon en masse to return to Syria.

Wish u would go instead
And since when citizens need permission to return to their country or u think syria is a private estate?

Genius at work! Those refugees with "Illegal" status will stay in Lebanon then and be given citizenship instead of deporting them.

Wow positive neutral, did you come up with all this racism by yourself or uve been reading some democratic quotes?