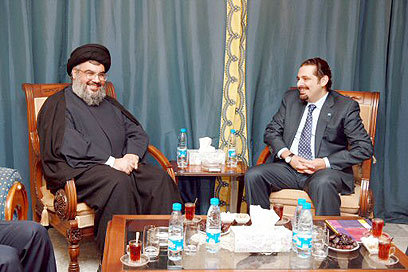 A meeting between head of al-Mustaqbal Movement MP Saad Hariri and Hizbullah Secretary-General Sayyed Hassan Nasrallah is not on the agenda of the former premier.

According to the pan-Arab daily al-Hayat published on Sunday, the meeting between Hariri and Nasrallah will not be held any time soon as the rift with Hizbullah is still acute.

Circles close to Hariri told the newspaper that the sharp differences with Hizbullah, in particular regarding its involvement in battles in neighboring country Syria and the negative repercussions of the party's decision, is the main reason for the wide gap between the two leaders.

Sources quoted Hariri as saying that “the recent developments in Arsal pose a warning to all the Lebanese, especially Hizbullah and its policies concerning Syria.”

“Hizbullah involvement in Syria was to prevent extremists from entering Lebanon in the first place, but what we witnessed was the complete opposite as if the clashes raging in (Syria's) Qalamoun was to facilitate their infiltration to Lebanon,” the sources pointed out.

The sources, however, said that Hariri will hold a meeting with Speaker Nabih Berri, who is the head of the AMAL movement and Hizbullah's ally, very soon.

The head of al-Mustaqbal Movement made a surprise return to Lebanon on Friday morning after three years abroad.

As long as the main program and objective of the political parties is focussed on religious arguments and not on education, employment, healthcare,economy etc...(for all Lebanese equally), tension and insecurity will remain in this country.

@FT...Seriously is that the best answer you can come up with here ? I kind of thought you much smarter than that, but after this post I'm questioning your intelligence ma man.

Read it again and slap yourself a few times after you realise what a dumb reply that was.

He will drop dead if he sees his face in the mirror, reading it again is impossible for him...

Hariri is simply conforming with the tried-and-true doctrine that no problem is too big to run away from. He has gotten to where he is by ignoring the fact that Shiites are in the majority in Lebanon and ignoring the fact that the Taef Accord (so-called) gift of half of Parliamentary seats to the Christian minority (30%) is an assault on all Lebanese Muslims. He is on a roll. With pleny of mayonnaise.

why do you call yourself chris not abbas? are you ashamed?

Sorry to burst your bubble, but the Shiites are not the majority, that's a lies concocted by the hezb's propaganda department and it was given some credence in some circles when it was repeated by Noam Chomsky after he visited Lebanon. Unfortunately some naive ignorant fool keeps repeating it as if it was fact. Sunnis and Shiites are about the same with Sunnis having a slight edge according to the voting rolls and the Christians are much more around the 40%.

Did you count the imported basij also in your census chrisabbas?

Based on your twisted logic and philosophy, Mr.chrisrechelo,the butcher of syria and his father before him and all the shi3a of syria should have no say whatsoever in the politics of syria since they constitute an absolute minority in that country, even less in numbers than the christians themselves. It is pretty clear that your problem and people who think like you, is christianity itself.I don't know where you got your figures from but to put your mind at ease I tell you that we the christians will remain a dagger in your heart and in the heart of everyone that adopts your sectarian logic. We were in Lebanon long long before you and your kind invaded this sacred land and will be here, and in CONTROL, long long after you have dissapeared. We have seen your kind come and go.Take a good look,our cross is dug deep in our land, and if you don't like it,the Arab world is big enough to to settle filth like you.

Look at all the Sohat