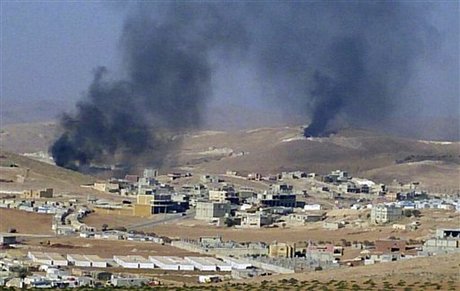 A Higher Relief Council delegation headed by Major General Mohammed Kheir headed on Monday to the northeastern town of Arsal to inspect the damage caused by clashes between the Lebanese army and Islamist militants.

“Our visit is to inspect the damage on the field and to prepare a plan to swiftly aid the residents,” Kheir told reporters.

“This is a preliminary inspection and in 24 hours Army Commander General Jean Qahwaji will task a committee with surveying the area.”

The fighting in Arsal broke out on August 2 when jihadists from Syria attacked army and police posts in Arsal after the arrest of a militant accused of belonging to Syrian al-Qaida affiliate Al-Nusra Front.

The damage to private and public properties was mainly in Arsal's northwest in the areas of Ras al-Sarj and the surroundings of Abou Ismail mosque.

Bashir Khodr, the governor of Baalbek and Hermel, said that residents of Arsal “were the victim of terrorism.”

“Syrian encampments are ticking bombs and what happened in the northeastern town should not occur again in any other area across Lebanon,” Khodr said.

For his part, Arsal municipal chief Ali al-Hujairi considered that the recent clashes in the town were expected.

“We don't want to engage in a war with anyone and we want to develop the town,” he said, demanding the state to assume its responsibilities towards Arsal.

He revealed that he had warned security apparatuses three months ago that gunmen had taken control of the outskirts of the town.

the Portuguese auto-correct seems to be switched on once again and causing many unintended errors when someone uses 7 languages to post.

do you believe in the proof of videos and pics of HA' southlebanon.org? It is filled with ample proof. I posted some of them recently but you mass reported the links and got them deleted.

save your "clean" money and go attend a basic English school.

I agree flamethrower! Always insist on proof and facts. Allah Yihmeek Ya Rabb for exposing their lies.