Jumblat after Talks with Hariri: Henri Helou is Our Candidate and We'll Not Abandon Him for a Settlement 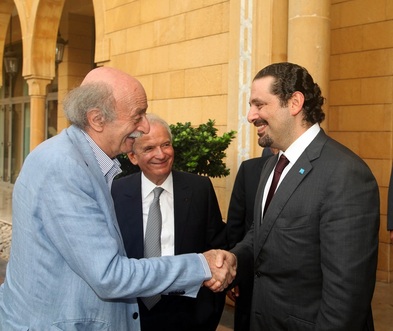 "Seikh Saad (Hariri) and all of us are keen on electing a president and we remind you that our candidate is Henri Helou,” Jumblat said after holding talks with the former Premier and the head of al-Mustaqbal Movement at the Center House.

Helou “remains our nominee and we will not withdraw his candidacy for a certain political settlement,” he added. “And if we abandon his candidacy, we would be withdrawing support for a path that we adopted and which is about moderation and centrism.”

“We hope the number of votes supporting Helou would increase and if the main parties agree on a candidate, let it be a battle over votes,” he remarked.

The PSP leader stressed that electing a new president is a fixed priority, highlighting that atrocities of the Islamic State of Iraq and the Levant against Christians and Yazdis in Iraq and Syria.

He said: “Vacuum harms all state institutions and we should not head to a situation similar to what is happening in Iraq.”

Former President Michel Suleiman left the Baabda Palace on May 25 without a successor to rule the state in the coming six years, as differences between the March 14 and the March 8 coalition prevent the presidential polls from taking place.

Jumblat told reporters after the talks with Hariri that the latter's return to Lebanon “amid a very complicated situation...deters great problems and underscores the path that his father (late PM Rafik Hariri) had taken and which is moderate Islam.”

“We might be face crises other than Arsal but with Hariri's presence and with the election of a president we will be able to confront political and social impasses,” he expressed.

“All the Arab world is under threat and there is chaos in general and I think that thanks to Hariri and others' efforts, like Saudi Arabia, there is an umbrella protecting Lebanon and we have to help in this respect.”

Hariri made a surprise return on Friday after spending three years abroad. He said during a security meeting at the Grand Serail that he was tasked by Saudi King Abdullah with supervising the spending of the one billion dollar grant to the military institution and security forces.

In a separate matter and earlier in the day, Jumblat stated that it has become necessary to seriously control the flow of Syrian refugees into Lebanon given the recent unrest in the northeastern town of Arsal and the likelihood that the conflict in the neighboring country will not end any time soon.

He said in his weekly editorial in the PSP-affiliated al-Anba website: “Given the recent Arsal unrest, we must reconsider the possibility of setting up refugee camps in Lebanon.”

He noted that the camps will have positive repercussions on the country's security and it will help organize the spread of aid to the displaced.

In addition, the MP proposed that one of the security agencies, such as the General Security, could be tasked with monitoring the flow of the refugees into Lebanon through inquiring about their status and “determining if they are indeed being persecuted or if they are seeking to carry out suspicious acts in Lebanon.”

Several officials have voiced their rejection of establishing refugee camps, warning that it may be a precursor to the eventual naturalization of the refugees.

Commenting on last week's fighting in Arsal, Jumblat called for immediately launching the “widest developmental plan for the town that harbored the Lebanese army.”

“The plan should create a qualitative change, not a cosmetic one, in Arsal in order to relieve its residents, who are not only suffering from daily hardships, but they are also burdened by around 100,000 refugees,” he explained.

Fighting erupted on August 2 between the army and Islamist militants in Arsal in light of the arrest of a prominent member of the al-Qaida-affiliated al-Nusra Front.

Scores of soldiers were killed and wounded in the ensuing clashes.

A ceasefire was reached on Thursday, but at least 35 troops have been held captive by the gunmen who fled the town.

Since Jumb is so sympathetic I suggest that the camp would be set in Mukhtara. I am sure the refugees will be looked after by Mr Jumb very well

Jumblat after Talks with Hariri: Henri Helou is Our Candidate and We'll Not Abandon Him for a Settlement ..............
Translation: "we could not agree on a price"

Helou “remains our nominee and we will not withdraw his candidacy for a certain political settlement,”

A certain political settlement meaning Aoun for president and Hariri as PM. Be honest Mr Kingmaker