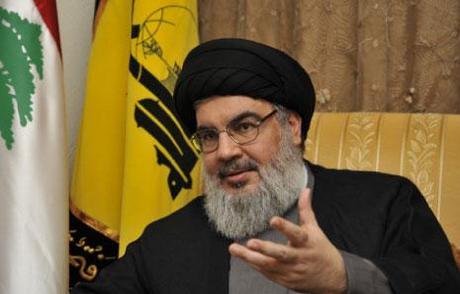 Hizbullah chief Sayyed Hassan Nasrallah declared that the “Lebanese support” for gunmen in Syria is still taking place, reiterating that Hizbullah's fighting in the neighboring country's al-Qusayr and al-Qalamunm regions prevented the Islamic State of Iraq and the Levant would from reaching Beirut.

"If we hadn't fought in Qusayr and al-Qalamoun, ISIL would have reached Beirut and coastal regions,” Nasrallah said in the second excerpts of an interview in al-Akhbar newspaper to be published on Friday.

He continued discussion over the presence and power of fighters in Syria: “The Lebanese support for armed groups in Syria is still taking place, and it includes arming and guiding them.”

"The fear of danger is growing and people are now more approving of our fight against takfiris,” he considered.

The Hizbullah chief went on to say: “Wherever there is support for takfiri ideology, there is a supporting ground that favors ISIL presence.”

This is happening in Jordan, Saudi Arabia and other Gulf countries, he pointed out.

Nasrallah added: “Turkey and Qatar support ISIL and I am convinced that Saudi Arabia fears the group.”

No, you brought these terrorists to Lebanon. Say what you want but the facts show your involvement in Syria and Iraq brought retaliation by these groups on Lebanese soil mainly targeting your own community.

by the way, the Free Sunni Brigades of HA has just been uncovered and its headquarters is in Baalbeck. These brigades were invented and operated by your Hizb.

lol yes, Nasrallah was getting bored so he told tens of thousands of terrorists to come on the border, massacre people and threaten lebanon. you guys sound like geniuses, we're very lucky to have you -not- on our side :)

I thought Zia-nab was your motive?
We switch the facts when it's convenient?

flamethrower, how is it then that Jumblat does not elect Geagea as president, genius!

Then he will say, we liberated Palestinian. lol

Yes, and an Iranian group is still supporting Baschar's army in the endless slaughter of innocents in Syria. What a goddamn hypocrite!

Hizzbullah has made many historical errors that has led to today's security risks. The biggest error made was following resolution 1701. Hizzbullah and Syria, refused to demarcate the border and allow border protection. Now I understand the selfish reason behind their opposition to demarcating the border, given that the sea was closed to them to bring supplies in and the airport alone is not capable of filling their needs to replenish needed weapons supplies from Iran that were heavily depleted during the 2006 war. That border was the remaining option to truck weapons through and cannot be controlled by security agencies. Nassrallah never thought back in 2006 that Syria will be in the state it is in today and that border will be used to transport weapons into Syria in support of the rebels, nor, it will be used by those rebels to stage attacks on Lebanon. The fact is, they made a historical bad judgement not to protect the borders and endangered the safety of Lebanese.

lebpatriot I see that the summer heat does not help you become any smarter.

Did you just declare jihad?

why you not using your other screen name Mystic?

IS is no where near Lebanon

yea, only if you consider arsal isnt part of lebanon.

Confusion from Nasrallah, he's all over the place, he can no longer keep a simple narrative straight

He's an attention whore, and wherever he appears, you can expect that he's trying to construct a narrative.

The hilarious thing is that without Assad, he's an isolated, socially hostile, and holds a minority in his own society.

Translation for what the Liar in Chief and leader of the Iranian Mercenary Terrorist Organization is saying: "These are my principals, if you don't like them, don't worry, I have many alternates to shove down your throat. I use these principles (lies) interchangeably in order to keep you dazed and confused and as far as possible from the truth as there is while I obey and execute the will of my masters in Iran."