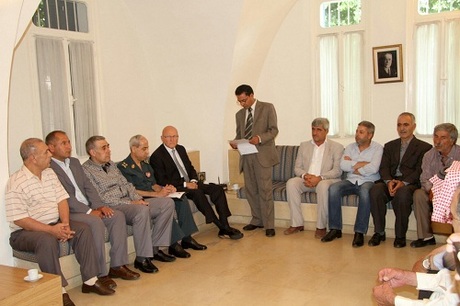 Prime Minister Tammam Salam said on Friday that the large influx of Syrian refugees to the northeastern town of Arsal had a negative impact on the village.

“Some refugees exploited the hospitality of the residents of Arsal and had a plan to create chaos in it,” Salam said after meeting a delegation from the northeastern town.

The PM “highly valued” the durability of the residents of Arsal, pointing out that their demands are righteous.

He also hailed them as “an example,” noting that they proved their unity away from any minor political interests.

“We are seeking to ease the crisis of refugees.”

Arsal, whose residents have been broadly supportive of the rebellion against Syrian President Bashar Assad, is currently playing host to 47,000 Syrian refugees.

Many of them sought refuge there after Syrian government troops ousted rebels from the Qalamun region over the border.

Clashes broke out on August 2 between the army and Islamist gunmen in the northeastern border town of Arsal in light of the arrest of a member form al-Nusra front.

Several soldiers were wounded and killed in the fighting that ended in a ceasefire on August 7.

The gunmen withdrew from the town, but abducted with them a number of soldiers and security forces.

Some Syrian refugees residing in encampments in the town are suspected of being involved in the gunbattles.

Meanwhile, Salam expressed relief earlier on Friday over the ministerial discussions the day before, praising the efforts exerted by ministers to resolve vital issues.

“I am relieved over the serious discussions that lasted seven hours during the cabinet session,” Salam said in comments published in al-Liwaa newspaper.

He pointed out that important decrees were endorsed, in particular the latest Saudi grant to Lebanese security apparatuses.

During a cabinet meeting at the Grand Serail, the government approved a $1 billion Saudi aid to enable security forces to counter terrorism.

Former Prime Minister and head of al-Mustaqbal movement MP Saad Hariri had announced last week that Saudi Arabia decided to support the military institution with a one billion dollar grant following the deadly clashes between troops and extremist militants in the northeastern border town of Arsal.

speakfreely
Deport them ALL. Leave the women here ? why? as it is 500,000 are already delivering their babies in Lebanon. Do the math.. how many Syrians will be in Lebanon?