Report: Syrian Troops Warn Tufail Residents to Evacuate Village ahead of Shelling it 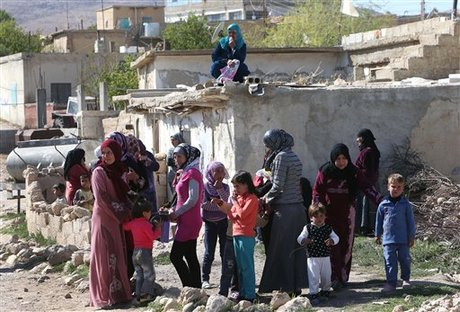 Syrian government troops have reportedly urged the residents of the eastern border village of Tufail to evacuate it ahead of a planned shelling, said the Kuwaiti al-Anbaa newspaper on Sunday.

The remaining residents of the village were warned to evacuate the area otherwise they may be harmed in the shelling.

One of the officials in the village informed western Bekaa lawmakers that the warning was issued by Syrian forces, demanding that the evacuation take place “within hours.”

The troops have alleged that gunmen were in the area.

The official however denied such claims, saying that 12 families are residing in Tufail and the only gunmen in and around the region are Hizbullah members.

He revealed that the officials were working on evacuating the Tufail Syrian refugee camp in the Arsal area, “but we were later surprised with the call to evacuate the remaining residents of the village.”

In April, Tufail was isolated after the only road that leads to the town came under the control of Syrian government troops.

The town is located at the end of the eastern mountain belt's plains, in an area that is 24 kilometers inside Syrian territories. Tufail is surrounded by Syrian lands to its north, east and south, and by the Lebanese villages of Ham, Maarboun and Brital to its west.

More than 4,000 Lebanese nationals reside in Tufail, Christians and Muslims, among them there are around 25 soldiers in the army and some 5,000 Syrian refugees.

Ahh, it's good to see that the Syrian regime and the Hizb have learned their humanitarian lessons from Israel well. Did they also drop leaflets from the air, or the printer didn't work?

Good one. They are now acting like the Israelis!! Trying to get the world opinion on their side and showing a modicum of humanitarian compassion. WHat hypocrisy.

nice naharnet, protecting israel by censorring those who denounce it?
reposting:

It is nothing new, they also evacuated quseyr before the assault for instance.
All armies in the world do it, it's a legal obligation.

The difference is that israel only pretends to do it, and then goes on to bomb indiscriminately. Or maybe their targetting systems werent working when they bombed the UN school after having been informed 17 times of its location?
Or when the gunship open fire on the kids on the beach, despite having direct sight of the beach?

so thanks but no thanks. go post your israeli propaganda on haaretz, it wont work here.

"The official however denied such claims, saying that 12 families are residing in Tufail and the only gunmen in and around the region are Hizbullah members."

lol yes of course, the SAA wants to bomb hezbollah. now we have heard it all