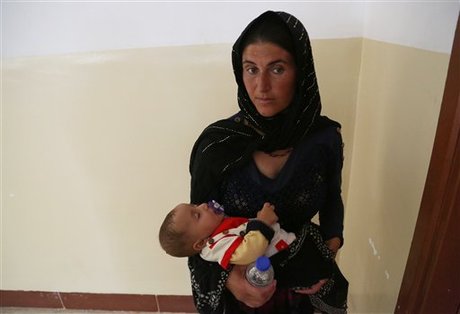 A Yazidi refugee fleeing the jihadist offensive in Iraq has given birth to quintuplets in northeast Syria, an official with the U.N. refugee agency said on Monday.

"Tamam Ramadan had quintuplets on Thursday -- two boys and three girls -- after a caesarian section in hospital in Qamishli," the UNHCR official said, asking not to be identified by name.

"The babies are doing well," he added.

Tamam, 27, from Syria and married to an Iraqi, is a member of the Yazidi community whom jihadists of the Islamic State group regard as heretics.

Twice the young mother had to flee as IS militants swept in a lightning offensive across northern Iraq.

In mid-June, she left the country's second city Mosul which the jihadists seized, and took refuge in Sinjar, the main Yazidi town in north Iraq.

Sinjar later also fell to the jihadists on August 3.

The UNHCR official said Tamam had managed to get out in time at the end of July, after reports that the IS militants were approaching.

She "walked from Sinjar for two days with her family before reaching the border with Syria", he said.

After taking Mosul, the IS advanced towards Iraq's autonomous Kurdish region, forcing many thousands of religious minority Yazidis and Christians from their homes.

After delivering her babies, Tamam returned to live with her family at Tal Alu near Qamishli.

She "is living in difficult humanitarian conditions, and is finding it hard to get milk for her infants," the U.N. official said.

Kurdish peshmerga fighters backed by federal forces and U.S. warplanes pressed a counter-offensive Monday against the jihadists after retaking Iraq's largest dam, as the United States and Britain stepped up their military involvement.

The recapture of Mosul dam marks the biggest prize yet clawed back from the jihadists since the IS offensive began in northern Iraq in June.

Last week the authorities in Syria said nearly 1,000 Iraqi families had flooded into the northeast of the country, fleeing the IS onslaught.

Many have taken refuge in Newroz camp in the Kurdish-majority province of Hasakeh.

The largest Kurdish-majority town held by the Syrian regime and Kurdish militias, Qamishli has been largely spared the devastation of more than three years of conflict in Syria's civil war.