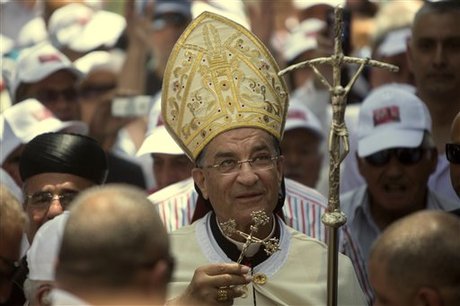 Maronite Patriarch Beshara al-Rahi is expected to travel to the Vatican on Thursday to meet with Pope Francis and senior officials.

According to al-Joumhouria newspaper published on Monday, talks will focus on the presidential deadlock and the exodus of Christians and minorities in Iraq and Syria.

Media reports had said that the Vatican considers the presidential elections in Lebanon as a battle of existence that surpasses the Maronites and focuses on the active Christian role in state posts in the country and the Middle East.

Last week, al-Rahi headed a delegation from the patriarchs of the Orient to the Iraqi Kurdish region of Erbil.

Islamic State militants in Iraq have been waging a campaign against minorities in Iraq, forcing thousands of people to flee their homes.

Al-Joumhouria reported that al-Rahi will head to Australia after the Vatican on a pastoral visit.

You see what I mean flamethrower about these fakes and hypocrites(:

flamethrower's english is perfect. Maybe he wrote that in a hurry because he has many threads and comments to attend to. Reduce undue criticism please

Excommunication, is a solution !

any Maronite who doesn't attend the next round of elections should be excommunicated !

not just Maronites, rather all falling under the Vatican authority.

the Vatican should excommunicate aoun for blocking the presidential elections.

Fatwa......
Fatwa could also come from Bkirky or Vatican.???
For a country sake just elect one ....anyone....
Or wait until a new generation of future responsible leaders take over out of tribal politics and never ending talk with no action.

FT is right the vatican has nothing to do with lebanese presidency. sleiman frangieh called it, bashar will appoint the president