Mashnouq, Ibrahim to Discuss Case of Arsal Captives in Doha 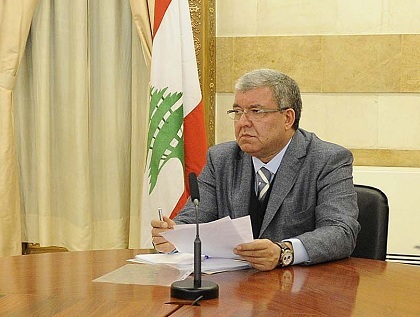 Interior Minister Nouhad al-Mashnouq will tackle the case of the abducted Lebanese soldiers and policemen, who were taken hostage by Islamist gunmen in the northeastern border town of Arsal, with Gulf senior officials.

According to As Safir newspaper on Friday, General Security chief Maj. Gen. Abbas Ibrahim will accompany Mashnouq to the Qatari capital Doha during the weekend.

The two officials will reportedly call on senior officials to mediate the release of the kidnapped security personnel.

“We will focus on the case of the abductees... We will exert efforts and persuade countries that could have a positive impact on the case to play a role,” Mashnouq told the newspaper.

Mashnouq has been reportedly invited to attend a meeting for the Gulf Cooperation Council's interior ministers.

The meeting is aimed at discussing ways to coordinate efforts to confront terrorism.

Analysts have said that advances by jihadists in Syria and Iraq, and U.S. calls for a coalition against them have made Gulf monarchies set aside disputes over Qatar's support for the Muslim Brotherhood.

Since the abduction of Lebanese soldiers and policemen in Arsal last month by Islamist gunmen, Lebanon has been reportedly seeking the help of Qatar and Turkey to ensure their safe release.

The militants included fighters from the Islamic State group and the al-Qaida-linked Nusra Front.

The jihadists have reportedly called on the Lebanese government to release Islamist inmates from the country's largest prison in Roumieh in exchange for the captive security personnel.

Only a few of the estimated 90 Islamists have been tried. Most of them were arrested over their involvement in bloody clashes with the Lebanese army at the northern refugee camp of Nahr al-Bared in 2007.

The fighting in Arsal was the most serious border incident since the conflict in Syria began in March 2011.

Abbas Ibrahim has excellent relationships with Qatar, Nusra and HA. He is well positioned to secure the abductees and achieve something.