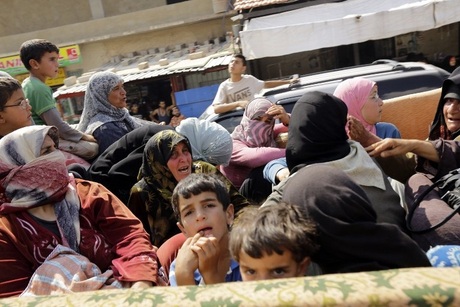 The Municipality of Borj el-Shamali in the southern district of Tyre gave Syrian refugees on Monday a 48 hours ultimatum to evacuate their tents and leave the town or they will have to bear the consequences.

“The decision was taken to safeguard the Syrian workers and to maintain the security in the area,” head of Borj el-Shamali municipality Ali Deeb told the state-run National News Agency.

He stressed that the Syrian encampment in the area was erected on a land that belongs to the municipality.

There are around 200 tents in the town.

“We reject any assault against Syrian refugees and the taken measure is a precaution to prevent any hostile action as we don't have accurate details on those who are entering and leaving the encampment,” Deeb said.

There has been growing resentment by the Lebanese people against the refugees given the recent developments in the country, most notably the abduction of a number of soldiers and policemen by Islamists from the northeastern town of Arsal in August.

The militants have beheaded two of the captives, sparking angry protests by their families, who have blocked roads and staged demonstrations throughout Lebanon.

Tents housing Syrian refugees in encampments in Beirut's southern suburb neighborhoods of al-Lailaki and Hay al-Sellom were torched after news emerged on the beheading.

Other refugees were given an ultimatum to leave the towns they are residing.

There are fears that Syrian refugees would be assaulted in retaliation to the beheading of the two army soldiers, however, the Islamic groups warned of any revenge act.

Prime Minister Tammam Salam appealed to the people on Sunday to “have faith in the government's handling of the file,” calling against taking any retaliatory action against Syrians.

southern, i thought these refugees are the same ones your hizb transported in buses to the embassy to cast votes for assad.

you really live in lala land don't you?

You are such a tool, I also share you resentment for Hezbollah but NO single group is more stupid and more reckless and a bigger disgrace to Lebanon and the founders of Lebanon, the Maronite community, than you right/wing tools on this forum. So full of ignorance and bigotry you are willing to ally with ISIS and animals that consider you infidels out of your hatred for Hezbollah. Now I see why we don't have a president, you idiots hate each other more than you love your own community or country. Keep posting such things, you are more irrelevant by the day and you can only blame yourselves.

oh snap arsal you caught me! i must have exposed myself as anti-syrian when i commented here:

"even if i understand and share their anger, attacking civilians is completely unacceptable. we need to go after isis/nusra, not some poor refugees who have been the first to suffer from these apes."

hizbushaitn are clearly scared from the syrian people now.
they are actually terrified for what is cming to their region as a result of their murders and massacres in syria.

Hello my Yazidi friend (MYF)! Do you like Clarks, John Deere, or you prefer Tommy Hilfiger shoes.... please, elaborate

Agreed completely, we have enough refugees, build camps along the border and INSIDE Syrian territory, and protect these refugees and protect the Lebanese. It's a win/win for all. Perhaps Naharnets moderators and the other right/wing Christian tools on this forum can beg their Saudi friends to get the terrorists away from Arsal and other border regions, then those refugees can be safe and we can move on with our lives.

Stone aged culture backed by a terrorist organization knows nothing but hatred and hate. This is ISLAM and its environment that its created.

Finally something we can all agree on, as a great Lebanese people: racism and blind xenophobia.

where did you think the inhabitants of Qusair and other towns would end up when you sent the Hizb there to take if for Bashar...Stop supporting the tyrant and maybe his people wont have to flee anywhere.

oh wow veritas, sounds from your story like we're thinking we're some sort of chosen people or something.

yes indeed this is what the government should do. Unfortunately we have become so divided that any big decision cannot be taken by our government.