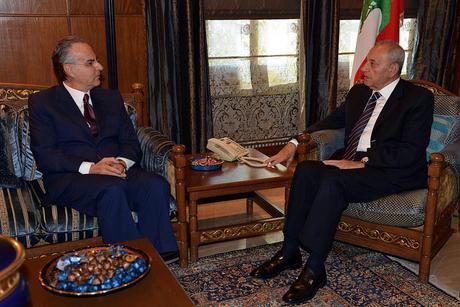 He said: “We advocate tackling pressing affairs, such as the new wage scale.”

He made his remarks after holding talks with Speaker Nabih Berri at his Ain el-Tineh residence.

“We do not want to legislate under street pressure or threats or intimidation,” added the lawmaker before reporters.

Legislation will take place because there is a need for it, explained Adwan.

Parliament has not been convening over a lack of quorum at legislative sessions sparked by a boycott of blocs that believe that parliament should only play an electoral role in light of the ongoing presidential vacuum.

Among the blocs has been that of the Mustaqbal that has rejected the new wage scale draft law over the burdens its approval may have on the economy.

Adwan stated: “We are prepared, as is the Mustaqbal bloc, to attend legislative sessions when necessary.”

The LF MP's talks with Berri also tackled the presidential elections and the March 14 alliance's initiative to end the deadlock.

The proposal calls for reaching an agreement over a compromise presidential candidate and the withdrawal of the March 14 camp's candidate, LF chief Samir Geagea.