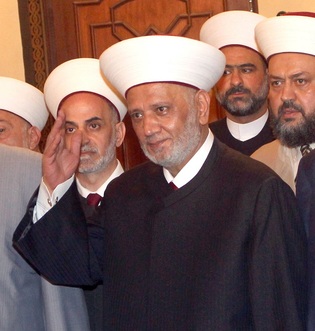 Grand Mufti Sheikh Abdel Latif Daryan stressed on Thursday the importance of cooperation between the Grand Serail and Dar al-Fatwa, calling on the abductors of soldiers and policemen to make an initiative and release them.

“They are precious and you should safeguard them... I am waiting for an initiative from you to release them,” Daryan said after talks with Prime Minister Tammam Salam at the Grand Serail.

He expressed solidarity with the families of the abductees, pointing out that Salam is exerting all efforts to safely release the kidnapped servicemen.

The troops and police were kidnapped by militants from al-Qaida-linked al-Nusra Front and the Islamic State group when they overran the northeastern border town of Arsal in August and engaged in bloody clashes with the army.

Their capture and the failure of the Lebanese authorities to secure their release sparked protests across Lebanon.

“I was handed my duties during a delicate situation and we will continue our mission based on national and Islamic unity,” Daryan noted.

He called on the rival political parties to elect a new head of state, saying: “Lebanon can not remain without a president and everyone should cooperate to end this constitutional demand.”

For his part Salam described the Mufti as “trustworthy,” stressing the “deep and binding ties between the premiership and Dar al-Fatwa.”

“Our country is in desperate need for all its leadership to join forces against the difficulties that are facing us.”

Daryan, 61, was unanimously elected as the country's new Grand Mufti in August.