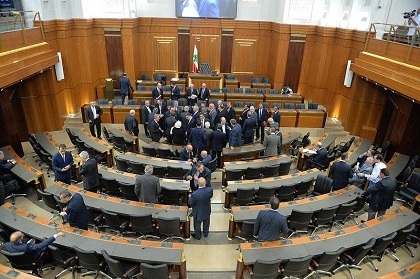 The parliament failed again Thursday to elect a successor to former President Michel Suleiman, leaving the country's top Christian post vacant since May.

Speaker Nabih Berri has set a new session for October 29.

Suleiman's six-year term ended on May 25. But the rival MPs have so far failed to elect a new head of state over their differences on candidates.

More than a dozen rounds of parliamentary sessions were not held due to lack of quorum caused by the boycott of several blocs.

The boycotting lawmakers claim that there should be an agreement on a compromise candidate before heading to the polls.

Following Berri's decision to adjourn the session, Telecommunications Minister MP Butros Harb summed up the political situation as follows: “A state without a president has to confront the biggest challenges.”

The state “has no president because a political team is paralyzing the electoral process,” he said in reference to the majority of the March 8 camp, whose MPs are boycotting the elections.

In a similar press conference at the parliament, Lebanese Forces MP Elie Kairouz urged Berri to come up with a constitutional deadline on the election of a president.

He urged the Change and Reform bloc of MP Michel Aoun to take a bold decision and find a successor to Suleiman.

The bloc's MPs and the majority of the March 8 camp have boycotted the polls to stop LF chief Samir Geagea, the March 14 alliance's candidate, from reaching Baabda Palace.

Geagea told reporters at his residence in Maarab on Thursday that the failure to elect a president was reflecting on the country's sovereignty, and political and economic situation.

“All the country is paralyzed for the past three months,” he said, adding Aoun's “Free Patriotic Movement and Hizbullah are taking advantage of the paralysis.”

The Caporal is destroying the only christian position in the M.E.
The "Me or nobody"shows is mad megalomania and his sole personal interest.

Stop stalking and insulting people and GET A LIFE!!!!

You are a loser who spends 24/7 posting propaganda and insults on the internet. Your life is meaningless!!

It is impossible for anyone of any importance, or anyone with a real job, to have the time you spend posting insults and propaganda on this website. (A website which you despise and want shut down, no less.)

You are a loser FT, and you will always be a loser.

isn't Lebanon still a democracy? so ANY CHRISTIAN can run for president, no?
or you d prefer to appoint a president as it suits you, syrian style?

The Islamic Republic of Iran and the resistance support the election of a patriotic lebanese president such as Michel Aoun. The Republic considers General Aoun not only a friend but also a citizen of Iran.

What a shame! No president till now and we consider ourselves a democracy somehow! All of our Leb politicians are rotten and good only for their pockets!

"just remove false hakim geagea and replace him with a cleaner person.

Flamey you sound like a third grader. If Lebanon is a republic/democracy, then anyone has the right to be a candidate. Since you're so confident that Aoun is more popular, what are you afraid of? Are you afraid that Geagea would get more votes than Aoun? In other words, are you afraid of real democracy actually taking place??

Geagea being a candidate is a pretext. This has nothing to do with Geagea. If Aoun really wanted to resolve this, he would propose other candidates. "But March 14 hasn't done this." Yeah, that's why Geagea even said he is open to discuss other candidates. Meanwhile, Aoun has said he will not discuss another candidate.

But I forgot through all this, Lebanon isn't a real democracy because we have 3rd graders like Aoun who throw a tantrum if other politicians get support. Aoun wants everyone to vote for him, or he sits on his couch in Rabieh like a crybaby.

Aoun: I won't accept to discuss with March 14 the issue of choosing any other candidate. http://www.naharnet.com/stories/en/147736