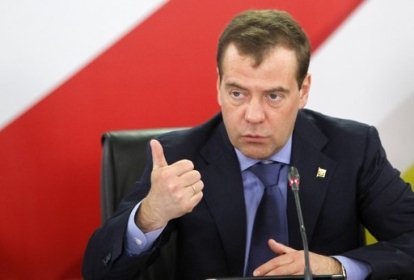 Russian Prime Minister Dmitry Medvedev thinks a reset in relations between Moscow and Washington is "impossible" while punishing Western sanctions remain in force, he said in an interview aired by U.S. TV Wednesday.

Medvedev blasted U.S. and EU measures imposed on Russia over its role in the Ukraine crisis as "absolutely destructive" and "stupid" and said there was no chance of mending ties with the White House while they were in place.

"No, of course not. It's absolutely impossible. Let's be clear: we did not come up with these sanctions. Our international partners did," Medvedev told American channel CNBC, according to a transcript by on the government's website.

East-West relations have slumped to their lowest ebb since the end of the Cold War over accusations Moscow is backing a separatist uprising in eastern Ukraine.

Russian Foreign Minister Sergei Lavrov on Tuesday held three hours of talks with US counterpart John Kerry in Paris at which Washington's top diplomat laid down a series of conditions to lift sanctions.

"And at this point... many of them are happening now. The troops are pulling back, (but) the heavy equipment still has to be pulled back and the border is yet to be properly monitored and secured," Kerry said.

Russian President Vladimir Putin, who is due to meet Ukrainian President Petro Poroshenko in Milan on Friday, at the weekend called back from the Ukrainian border 17,600 soldiers he had stationed there.