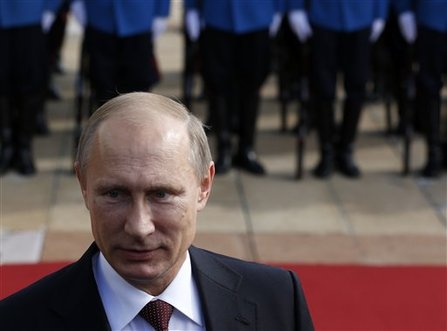 President Vladimir Putin accused his US counterpart Barack Obama of a hostile approach towards Russia, warning in a Cold War-style tirade that Moscow would not be blackmailed by the West over Ukraine.

Putin fired off his combative comments shortly before he arrived amid tight security to a red carpet welcome in Belgrade, seeking to cement Russia's influence in its loyal European ally.

Belgrade is staging its first military parade in 30 years to mark the 70th anniversary of its liberation from Nazi occupation -- an event brought forward by four days to coincide with the visit by the Kremlin strongman.

In some of his most pugnacious comments yet on Russia-US ties, Putin took issue with Obama's speech at the U.N. General Assembly last month, when he listed "Russia's aggression" in eastern Ukraine among top global threats, along with Islamic State jihadists and Ebola.

He told the Serbian daily Politika it was "hard to call such an approach anything but hostile".

"We are hoping our partners will understand the recklessness of attempts to blackmail Russia, (and) remember what discord between large nuclear powers can do to strategic stability," Putin said.

He branded attempts by the West to isolate Russia over the six-month conflict in Ukraine an "absurd, illusory goal" and accused Washington of meddling in Russian affairs.

Putin, who is to meet Ukrainian leader Petro Poroshenko in Milan on Friday, called on Kiev to start nationwide dialogue, saying there was a "real opportunity" to halt the war.

Putin reiterated that Moscow was ready to mend fences with Washington but only if its interests are genuinely taken into account.

Putin's predecessor Dmitry Medvedev spearheaded a "re-set" in ties with Washington but relations have quickly unraveled since Putin returned to the Kremlin for a third term in 2012.

Russia is now facing its deepest period of Western isolation since the Cold War, with US and EU sanctions dealing a blow to its already stuttering economy.

Despite the distinct Western diplomatic chill, Putin was greeted warmly in Belgrade, which has refused to align with the EU sanctions against Moscow.

He and Serbian President Tomislav Nikolic were to lay wreaths at a cemetery where Russian soldiers were killed in the October 1944 battle for Belgrade.

Putin is then expected to make an address at the military parade involving more than 3,000 soldiers and featuring a Russian aerobatics display -- but pointedly not being attended by any U.S. officials.

"Our joint obligation is to oppose the glorification of Nazism and attempts to revise the outcome of the World War II," Putin said in the Politika interview, warning of rising "neo-Nazism" in the Baltics and Ukraine.

The EU, which began accession talks with Serbia in January, has bluntly told Belgrade it should prove its credentials as a future member during the visit.

Since the Ukraine crisis erupted, Serbia has been trying to balance its obligations towards the EU and maintaining good ties with Moscow.

For Russia -- which backs Serbian opposition to Kosovo's independence -- it is important that Belgrade's membership of the European bloc does not go against Moscow's interests.

"The main goal of the visit is to buttress existing links. Energy will be high" on the agenda, Fyodor Lukyanov, editor of Russia in Global Affairs magazine, told AFP.

Serbia is one of the countries on the South Stream pipeline, a 16-billion-euro ($22 billion) project aimed at reducing Moscow's reliance on Ukraine as a transit country for its natural gas following disputes with Kiev that led to interrupted supplies to Europe.

The European Commission has said the project is not in line with its rules and threatened to fine member states if they go ahead with construction.

Russia signed the South Stream accord with Serbia in 2008 and plans to begin construction this year, but Belgrade has said it will wait until there is agreement between Brussels and Moscow.

Russia and Serbia are tied militarily, and set up a rapid response base in the southern town of Nis where Russian aircraft were based.

The two also have a free-trade agreement and Russia is Serbia's third largest foreign trade partner with two-way business in 2013 at almost $3 billion.

KGB Putin talking about hostility and meddling! Even Uncle Joe Stalin is spinning in his grave with laughter.

Oh veerrry good! you can repeat things over and over we have already covered that in our last segment, but let me ask you this can you say "goo'night, hello my name is Paulie", jump to the organ grinders tune and pass your little hat around at the same time?